Meet Bernardo Munoz, from Great Wall of LA kid to Board Member of SPARC

Help us in supporting future youth like Bernardo Muñoz! Your pledge will go on to support the next Great Wall designs for the 1960s -1990s decades. With your support, we can continue to provide dozens of artists and youths with opportunities to contribute to the future mural designs. 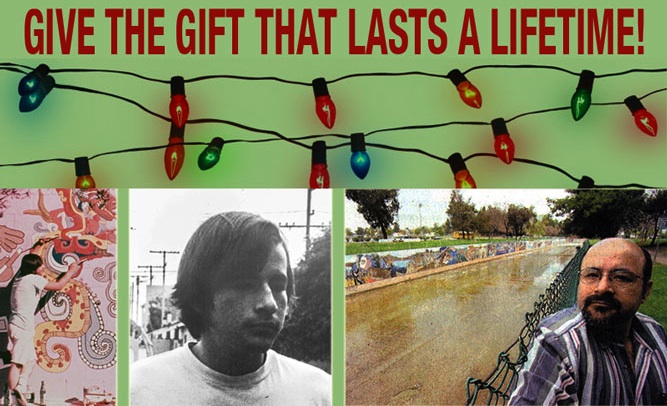 SPARC Board Member, Bernardo Munoz, began working on his first collaborative art projects in Boyle Heights under Judy Baca’s mentorship in 1971. Inspired by the power of mural making, he became a member of the Great Wall of Los Angeles production in 1975. As a result of his involvement in the arts, he opened his own graphic design firm as an adult. But the skills that he would learn as a young mural-maker would last a lifetime and would affect change across the globe.

Bernardo was an inner-city school kid with loads of artistic inclination but little opportunity, he worked on the Great Wall during its first stage.  Bernardo says, “The Great Wall experience helped many of the kids make a positive transition into adulthood.  A lot of the kids were like butterflies coming out of the inner-city cocoons.  To go from graffiti to doing something that the community respects and appreciates, that’s incredible.  It takes two people to change, not just the person themselves, but also support from the community”

The recent passing of Nelson Mandela inspired Bernardo to share the memories of when he and his family lived in South Africa. Bernardo shares that he and his family, “would stand witness to the abolishment of Apartheid and WF De Clerk’s transferring of the power to the Blacks.” During his stay he would contribute to social change through the arts by applying what he learned during his time with Judy Baca as a member of the Great Wall production team. Bernardo recalls that he created, “wonderful African architecture decorative elements to for the Palace of the Lost City in Sun City which was one of the lone inner isolated countries known as Boputhatswhanna. I created a mixed team of artists that represented 11 countries which I also paid them according to their capabilities and not for their race in which several South Afrikans tried to reprimand me and my company for doing such a thing since it did not go by the Apartheid regulations, I stood my ground and responded that if they do not accept, I will stop the work since I believe in equality.” About 45 of the artist assistants where black from various tribes such as Zulu, Zuana, Coza and others. He recalls the most magical moments when they gathered to celebrate a birthday occasion; the blacks sang songs in their languages in “a cappella” with, “such magical sounds that you had to be there to truly enjoy”, he shared.

Bernardo’s story is one of many that reflect the power of the arts to affect change around the world; they are the stories that inspire SPARC to continue its mission and dedication to Art, Community, Education, and Social Justice.

Your Donation will enable us to continue our work in 2014!
A Quick View of some Highlights from 2013
We stand proud of our accomplishments in 2013 and remain true to our mission and goals for the coming year:
We need your help to support art, education, community, and social justice world-wide!
Donate Today!