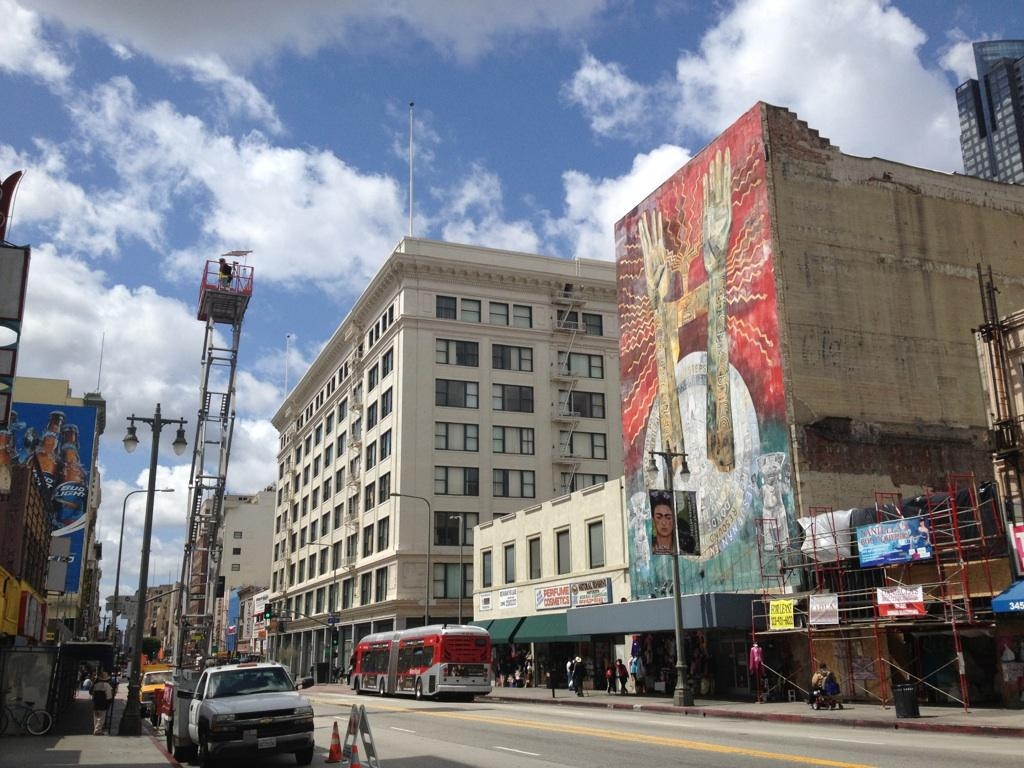 Calle de la Eternidad was the former name of Broadway Blvd., where the mural WAS located (SPARC is working to bring it back to Broadway). Poethig emphasizes the nature of time and of space. Using images familiar with the Latino community who live and work in the area, the words of Octavio Paz around the Aztec calendar express the feelings of dislocation and adaptation. Resembling the city’s high-rise buildings are two enormous golden arms reaching up to the sky in a gesture of great plea, accompanied by two seated pre-Columbian figures. Poethig’s imagery and the poem offer a reality where place becomes changeable and time is frozen, to the viewers along the street engaged in the everyday struggles of life in Downtown Los Angeles suggesting the reality of being at home in Los Angeles with feelings of living in exile.

The first thing that stood out to muralist Johanna Poethig during the painting of Calle de la Eternidad in 1992 on Broadway in Los Angeles was the difficulty of the site: a tall wall, off the ground, on a busy street. “This wall was above an awning of 15 feet, and [the mural] was done on a swing stage. You had to climb up the awning, and get on this corrugated roof, and then get on another ladder, and then get on the swing stage… Mural painting is not for the faint of heart.”

She fondly remembers the lively and loud surroundings—namely, the festivals that often took place on the streets below, the merchants watching the mural progress from across the street and the constant repetition of a song El Baile del Perrito, or “The Dancing Dog”. All the stores were playing that one song with the barking chorus all day long, the painting keeping pace with all the rhythms of the street. 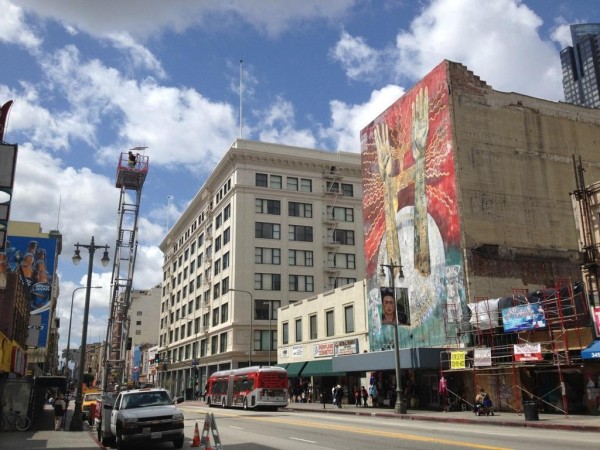 Twenty-four years later, Johanna has returned to SPARC to help digitally restore the mural—and given her new environment, it’s seemingly quite the contrast. Now, she works from UCLA@SPARC’s Digital Mural Lab (DML), zeroing in on details of the mural on a large tablet. But Johanna says, apart from the markedly different physical nature of the lab, it feels the same. “It is the same,” she asserts.

Working in the DML allows Johanna to engage in the same “back and forth” process that she uses when painting her murals on site.  “I have to get really close, and pull back, just like when you paint a mural—but this way, you’re just working on the screen.” In some ways, Johanna notes that the technology gives her more control over the artwork—the power to manipulate a 40 x 60 foot-wide image. “It’s interesting, the kind of control you have with this, and the fact that you can get it so close to the original is really great… At the same time, the technology is its own thing so in a way I can enhance it in ways that are new.” Johanna utilized the original palette from her mural,  sampling its original colors to mix and create the digitally conserved full scale file.

Digital drawing, which is what Johanna describes above, is just one step of a multifaceted and difficult process. “Once the CityWide Mural Program (CWMP) Team heard that the building [of Johanna’s mural] would be removed in 2012, we came up with a plan to come up with a hi-res digital composite of the mural,” CWMP Project Manager Carlos Rogel says. “But while we had done a lot of works that were smaller scale and gotten really good results, including the digitization of the Great Wall of Los Angeles, we hadn’t done such a vertical mural like Johanna’s. It produced some unique problems to solve on the site.”

Specifically, the team had to rise along the height of the mural—nearly 60 feet in the air—equipped with high-quality lenses and high-resolution cameras to capture all of the subtle brush strokes of Johanna’s piece. “We also had to be 150 feet away from the wall, so we had to actually photograph it from across the street,” Carlos says. The team had to control for lighting conditions and color variations, “because a passing cloud or just the movement of the sun in the sky would affect the quality of our photographs. We had to take all this into consideration and time it so that every photograph matched later on when we assembled the full file.” 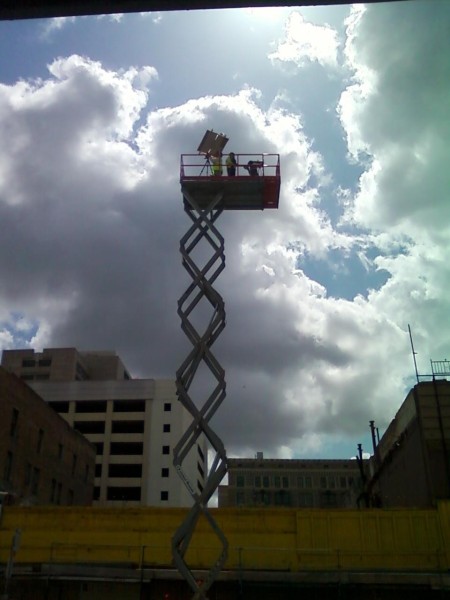 Scaffolding on which Carlos and Sylviane took the photos of “Calle de la Eternidad”.

After taking the photos, the Team was able to create a two-scale digital file of “Calle de La Eternidad” in its most recent and best state, so they could use it as an underpainting for Johanna’s digital restoration. The files were stored for almost four years until the Team was able to advocate for funds to restore the work. “Through the CWMP, we’ve been able to invite Johanna back to do the next step,” Carlos says, “which is to digitally paint the full quality, fully restored version of the mural.” Moreover, the new technological affordances of today—such as faster computer speeds—make the process run smoother, and allows the CWMP to give Johanna an “uninterrupted, pleasant digital painting experience.” 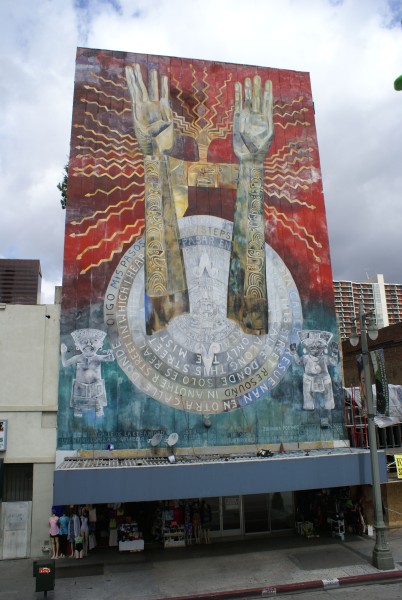 Johanna, a prolific visual, public and performance artist who has produced numerous public art projects, was at SPARC during the 2016 Summer to digitally restore Calle de la Eternidad—a mural that, she says, has always been magical to her. In many ways, Eternidad is site-specific. The surrounding architecture of the site, she recalls, seemed to be reaching towards the sky. This led Johanna to feature the hands, which gesture upwards, as the central image. The hands are modeled after pre-Columbian symbols that Johanna says “represent the history and the ancestry of people in this area and California”—symbols that are both “ceremonial and gestural.”

For over 25 years, Johanna has told the stories and preserved the histories of the cities and neighborhoods in which her work is placed. And to be back at SPARC, who has sponsored three of her murals (including Eternidad), “feels very, very good,” she says. “Having worked on public art projects with a lot of organizations, SPARC is an incredibly powerful organization. And its contribution to the mural movement, to muralism, and to L.A…. you can’t measure it.” 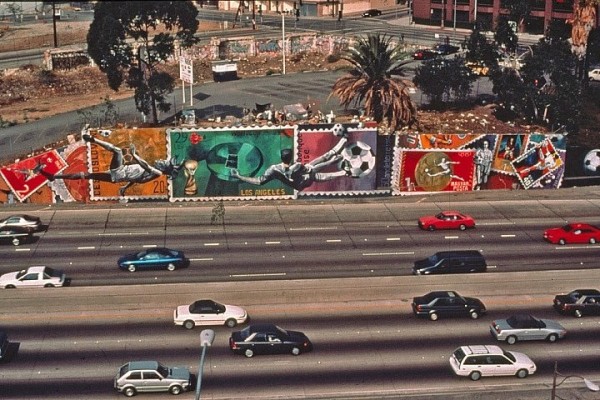 “STAMPS OF VICTORY” (1994) Commissioned  by SPARC and World Cup Soccer. Designed by Johanna Poethig. The mural was located alongside the 110 Freeway.

Although the building on which Johanna’s mural was located had been demolished for extensive renovations, Johanna is not filled with anger, but rather, gratitude.  “You know, to be honest with you, I’m just really grateful that this is happening… I’m just seriously happy that this mural is going out and gonna continue to have a life on Broadway.” Fortunately, SPARC’s Mural Rescue Team took photographs of the original mural, and this summer, Johanna is working through the CityWide Mural Program (CWMP) to work on digital renderings of the mural, so that when the CWMP installs Calle de la Eternidad, it will appear just as it did when it was first painted. “The final artwork, once it’s completed and installed, will probably be slightly larger than the original and definitely just as visible,” Carlos Rogel assures. 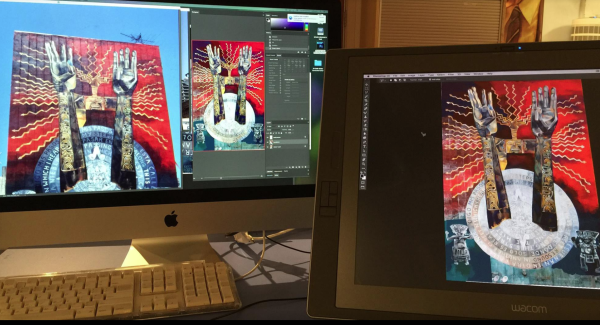 What’s most important to Johanna is the ability to preserve narratives that are held so deeply in murals. For Johanna, these stories told by murals are not simply horizontal. “The way we live now is very horizontal, in a sense. We have a lot of media, and we skim the surface of all these things that are happening. Our time is very pixelated and in the moment. But [murals have] a narrative that goes deeper into the past, and gets carried into the future. For me, that preservation and taking these concepts into the future and considering them in the present [is what] I’m really very happy about.” 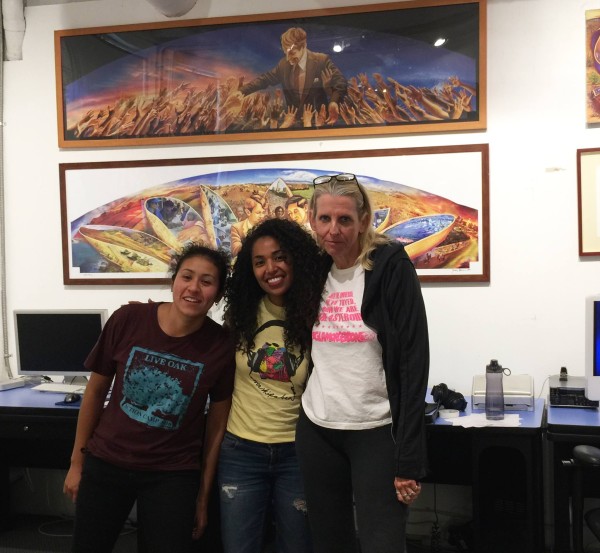 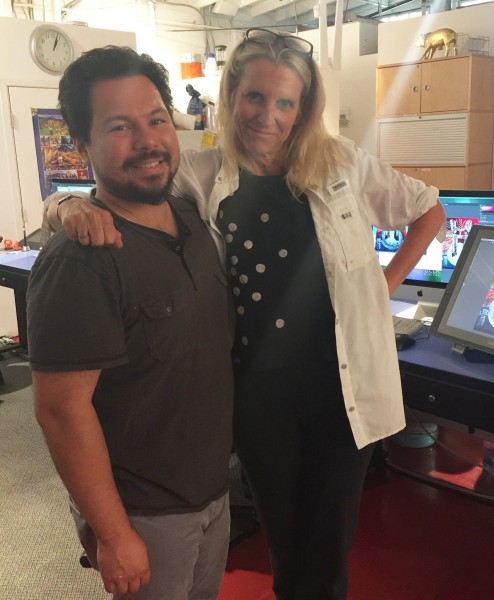 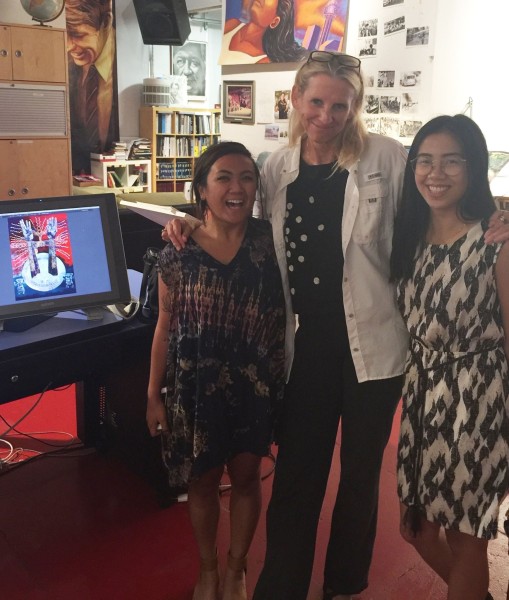 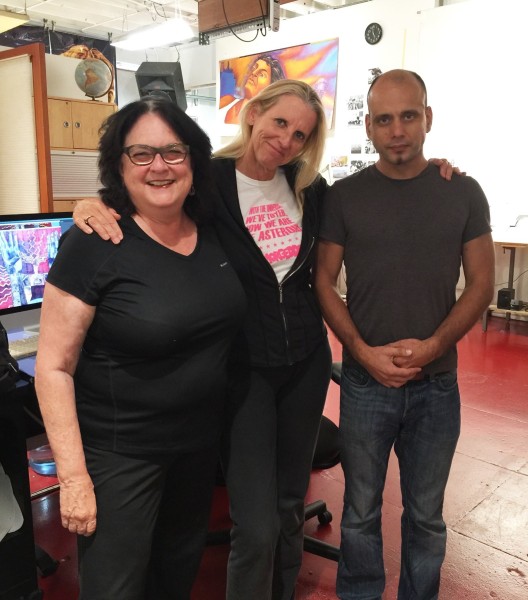 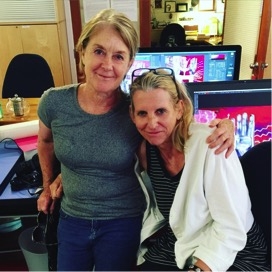 Johanna further comments on her experience at SPARC, via social media, upon returning home: “What an amazing team at SPARC where I spent the last two weeks restoring my 1992 mural Calle de la Eternidad in their Digital Lab! So many good projects and conversations going on all day. I worked with SPARC in the 1990’s doing 3 murals around LA and now back again in 2016 – the incredible Judy Baca has built a historic, unique organization that creates, documents place, communities, neighborhoods and histories, restores, preserves and keeps innovating both in the street, with paint systems, research and in the Digital Lab. There is so much to say about Muralism the intersections with other activist art movements, its history, aesthetics, contributions and trajectory and how it has informed public art, collaborative and participatory and social practice. It was great to reconnect and make new friends and colleagues. Big thanks to Judy, Carlos, Debra, Farhad, Kaelyn, Elaine, Nicole, Myisha, Mindy, Jose and his baby Benjamin and more for your help and company.”

SPARC is extremely grateful to assist Johanna in preserving the history of her piece, and the many narratives that are imbued within it, and the legacy of muralism through the CityWide Mural Program, a project with the Department of Cultural Affairs.

Learn more about the CityWide Mural Program and check out the 6 ICONIC MURALS already restored on SPARC’s Issuu!

Learn more about Johanna Poethig on her website, http://johannapoethig.com/.