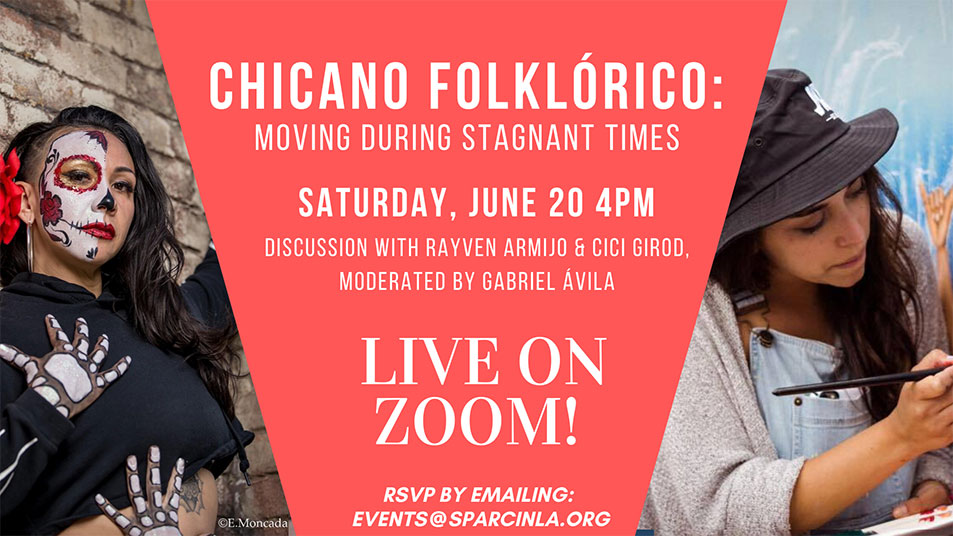 A Discussion With Rayven Armijo, Cici Girod, and Gabriel Avila

Chicano Folklórico connects a tradition of Mexican folklórico with Chicano culture in LA. SPARC artists Rayven Armijo and Cici Girod led a 6-week Chicano Folklórico course online, engaging dancers of all ages in learning “La Danza de Los Viejitos” to honor our elders and teaching families to create meaningful costumes from reusable materials. Join us this Saturday, June 20th for a conversation on Chicano Folklórico and the past 6-weeks of movement and art with instructors Rayven Armijo and Cici Girod, moderated by Gabriel Avila, Artistic Director of Pasion De Mi Tierra Dance Company.

Stop by and chat with us about Chicano Folklórico and moving during stagnant times! Email events@sparcinla.org to RSVP and receive Zoom information.

Rayven Armijo has studied Mexican folk dance and flamenco from her mother, Carolina, since the age of three. Rayven became the assistant director at the age of fourteen of her mother’s group, Ballet Folklórico de Carolina, formed in 1975. In 2008, she was a top twenty competitor in the Fox hit show, So You Think You Can Dance, the producers categorized as her as the “contemporary ballet dancer.” Rayven earned her MFA in choreography in the World Arts and Cultures/Dance Department at UCLA.

Cici Girod is a visual artist and freelance graphic designer, independently researching food politics in the era of climate change. She graduated from UCLA in 2017 with a BA in World Arts and Cultures. She was a previous Getty Multicultural Undergraduate Intern for SPARC and currently works as a Digital Lab Assistant where she researches and supports the development of murals with SPARC.

Gabriel Avila, a native of San Luis Potosi, Mexico, has been educated in many disciplines of Dance & Movement, including African, Ballet, Contemporary, Flamenco, Folklórico, Modern, Jazz and Movement for Musicals. He has 2 degrees in Art History and is pursuing a Masters at Cal State LA. He is also the founder and artistic director of Pasion De Mi Tierra Dance Company. Mr. Avila has choreographed works of art that have been presented in local venues in basin LA where he is consistently teaching at various studios, and engaging in workshops dedicated to the preservation and awareness of Folklórico music and dance.