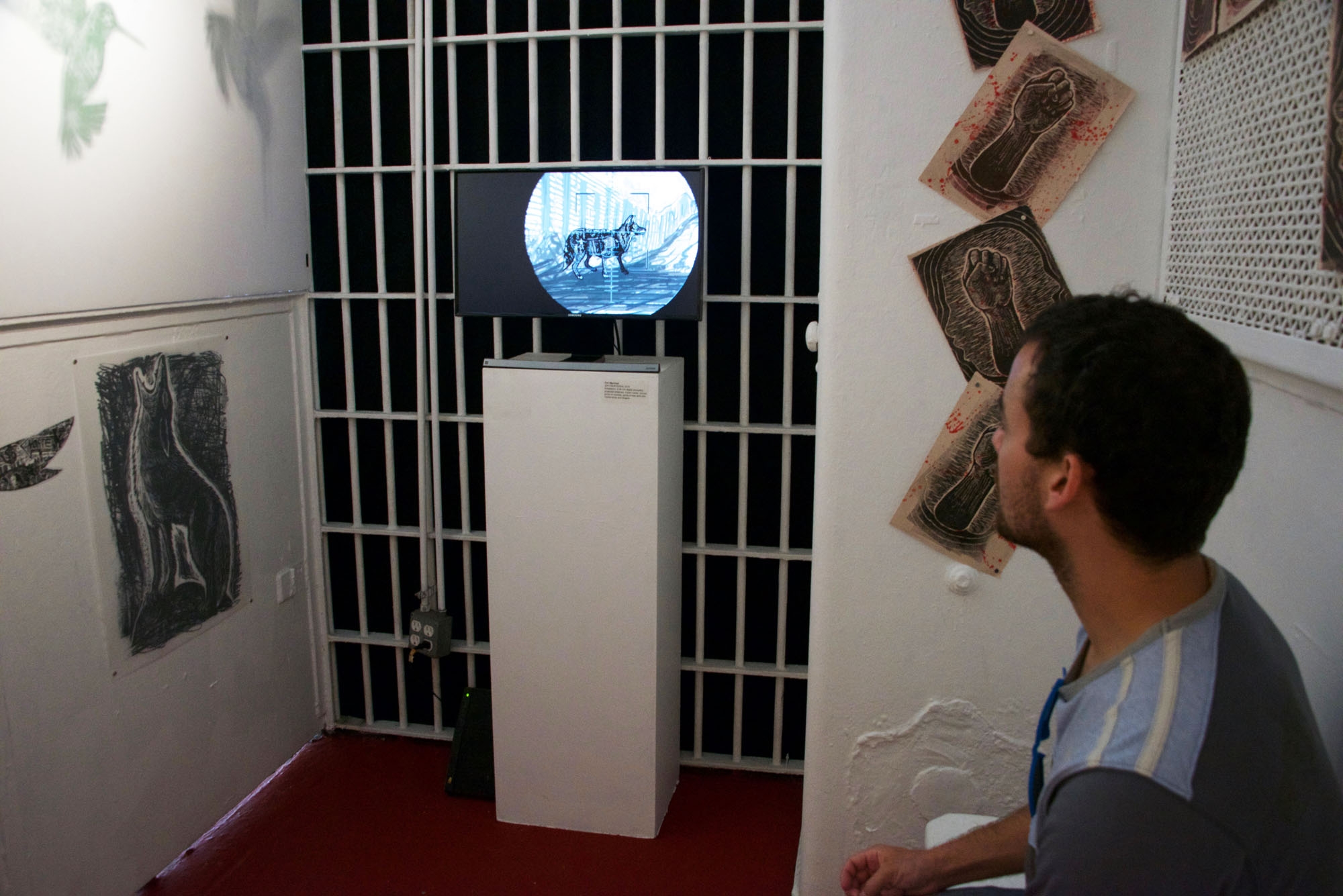 In their exhibit “Division: Reflections and Shadows”, which opened on June 25, 2016 in the Durón Gallery at SPARC, the Los de Abajo Printmaking Collective along with guest artists explore the impact and establishment of divisive forces through the radical medium of printmaking. 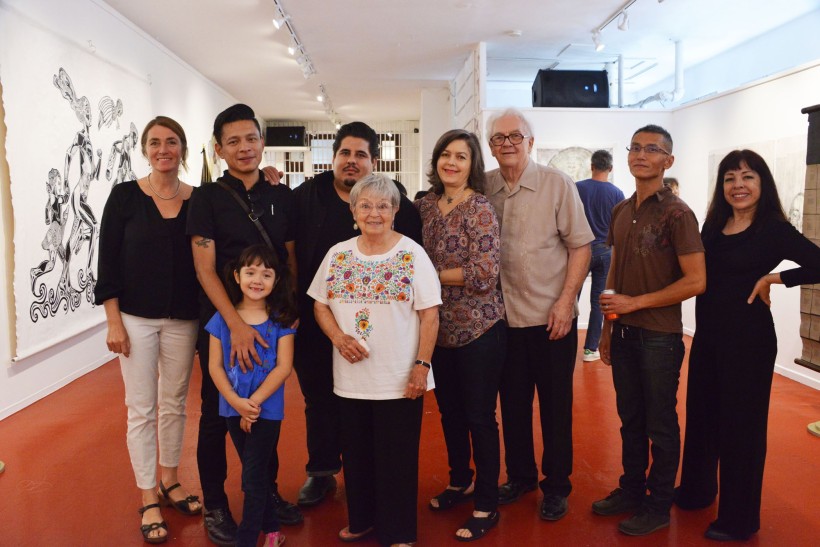 Art is often used as a medium for conversation, a vehicle for change. Yet vital issues are too often overlooked, despite the salience of them in our daily lives.

One of these issues is migration, a topic that has been diminished or manipulated in conversations today.  With the issue of migration comes the idea of borders, of barriers, of divisions: what manifests from these divisions? What lies in or produces the reflections and shadows cast by these borders?

In their exhibit “Division: Reflections and Shadows”, which opened on June 25, 2016 in the Durón Gallery at SPARC, the Los de Abajo Printmaking Collective along with guest artists explore the impact and establishment of such divisive forces. Using printmaking’s radical role as a political and social implicator, the artists propel the medium of printmaking even further beyond its given use and meaning.

“When we decided on the theme for this exhibition, I thought it would be interesting to do something that dealt with the issue of mass, undocumented migration in the world,” artist Poli Marichal says. Her piece “Sin Fronteras” is a video installation placed in a small cell within the Durón Gallery at SPARC, located in the old Venice Police Station. “I decided to do it inside the cell to underline the whole notion of being enclosed, of being persecuted for being undocumented migrants.” 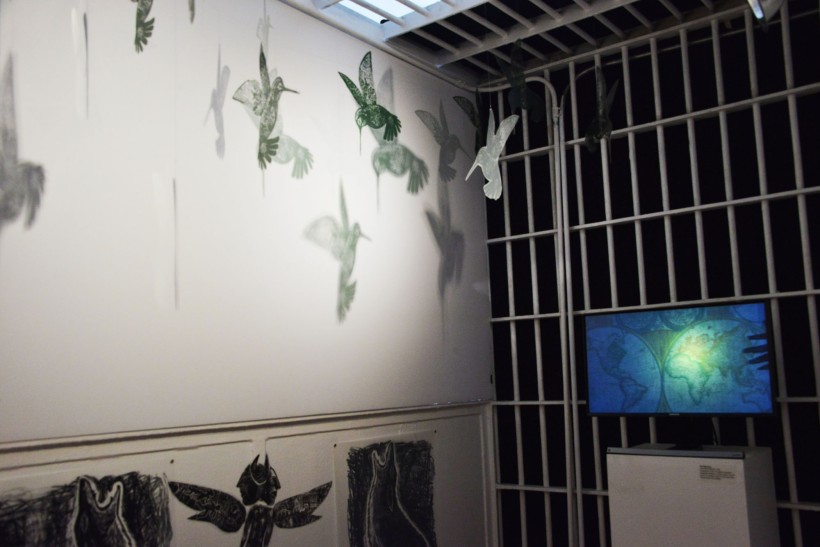 “Sin Fronteras” displays an animation of Poli’s prints, which the visitor watches amongst cut-out hummingbirds casting shadows on an adjacent wall. “The hummingbird is a symbol of hope. But in Aztec tradition, hummingbirds were souls of dead warriors. It’s all the people who cross the border but don’t get here—it’s a memorial, in a way.”

In contrast to the hateful and misguided conversations about borders and divisions happening across the globe, the exhibit humanizes and brings lived experiences to these issues. The works of Marianna Sadowski, Yvette Mangual, Don Newton and Nguyen Ly all embody the physical act of migration, and are imbued with the notions of attempted flight and impending stagnation. This is readily apparent in Yvette Mangual’s “Flight”, a linocut, mixed media piece showing a family’s attempted flee and the shadowing forces that hinder the journey. The image in “Flight” comes from the sign that is actually placed by the border. 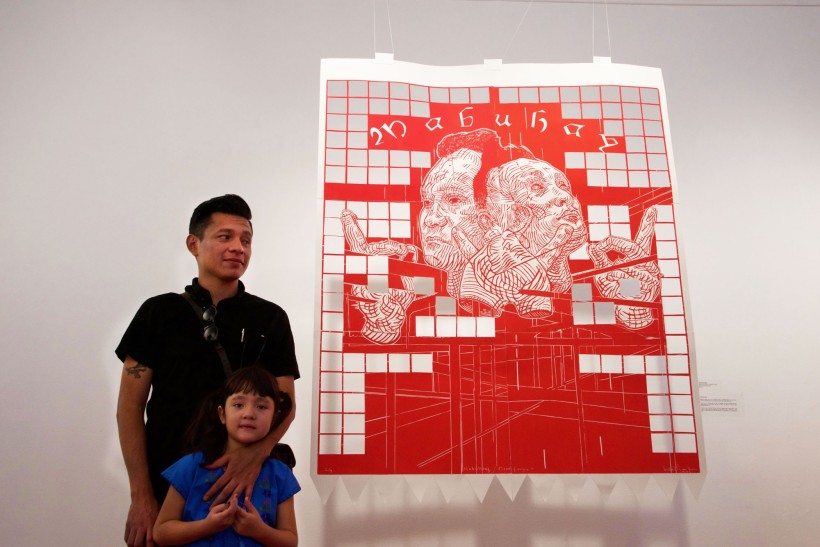 Pavel and daughter with his piece, “Mabuhay”

Division also addresses divides within and between nearby communities. Oaxacan artist Pavel Acevedo’s “Mabuhay”, created with the papel picado technique, explores the coalescing duality of the Filipino and Mexican identities, recognizing that each culture, though distinct, has points of intersection and commonality. Pavel observes, “A lot of divisions in the United States are based on race.” He notes that racial divisions are more apparent in the U.S. than in Mexico.

Some of the artists choose to bring oppressive histories and societal disorders to the forefront. Kay Brown’s “AUSTRALIA & AMERICA IN A SEA OF SORROW” explores how psychological barriers became physical barriers through a mixed media map indicating colonized territories and the indigenous peoples that once occupied them. In the same vein, artists Sergio Sánchez Santamaría, Joel Rendón, and Daniel González use the symbolism of national flags—which are rooted in divisive, territorial power dynamics—to create their project “False Flags”, a series of flags recreated to better represent the conditions and ideologies of a given society. 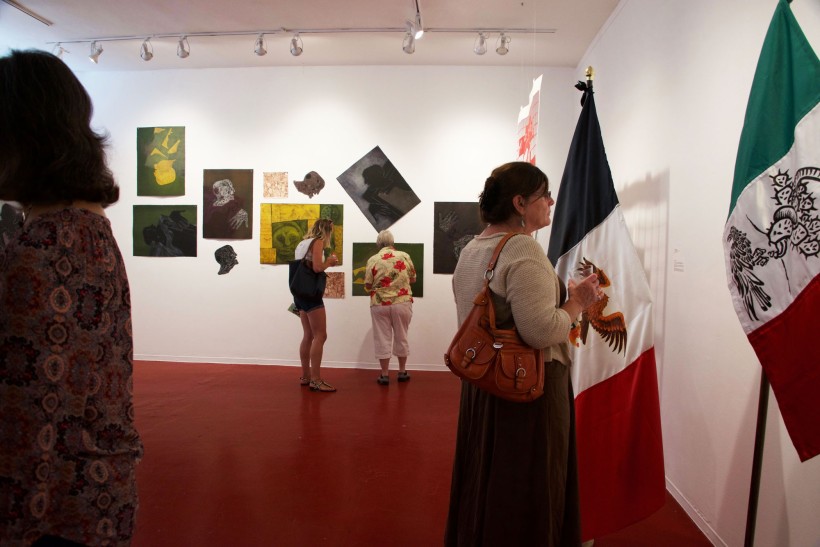 Gallery patrons spectating the art at the opening of the exhibit.

With every piece placed in the Durón Gallery comes not merely a desire to create beautiful art, but a sense of responsibility. For Poli and the artists of the exhibit, that responsibility is to raise awareness, to ignite a collective consciousness through art.

Poli wants visitors to leave the exhibit with more than knowledge. “I want them to take action,” she states. “Support people who are fighting for the rights of other people. Be more open. Realize that the United States is a country of many countries… This country was built by migrants.”

The Durón Gallery at SPARC is open from 11am-5pm, Tuesday to Saturday. Division: Reflections and Shadows will run until closing reception on Friday, September 16, 2016 5pm-9pm.

Learn more about the Durón Gallery. 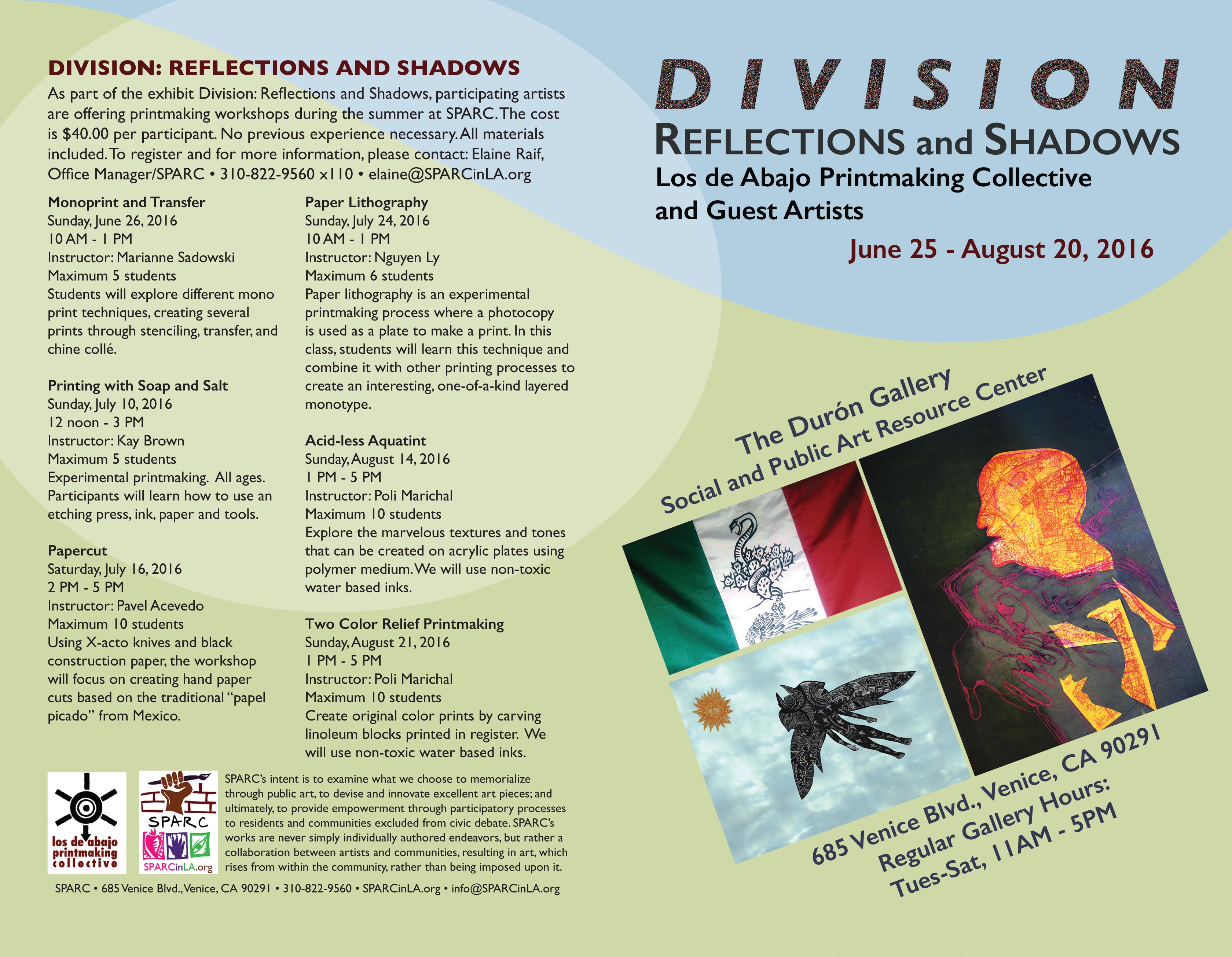 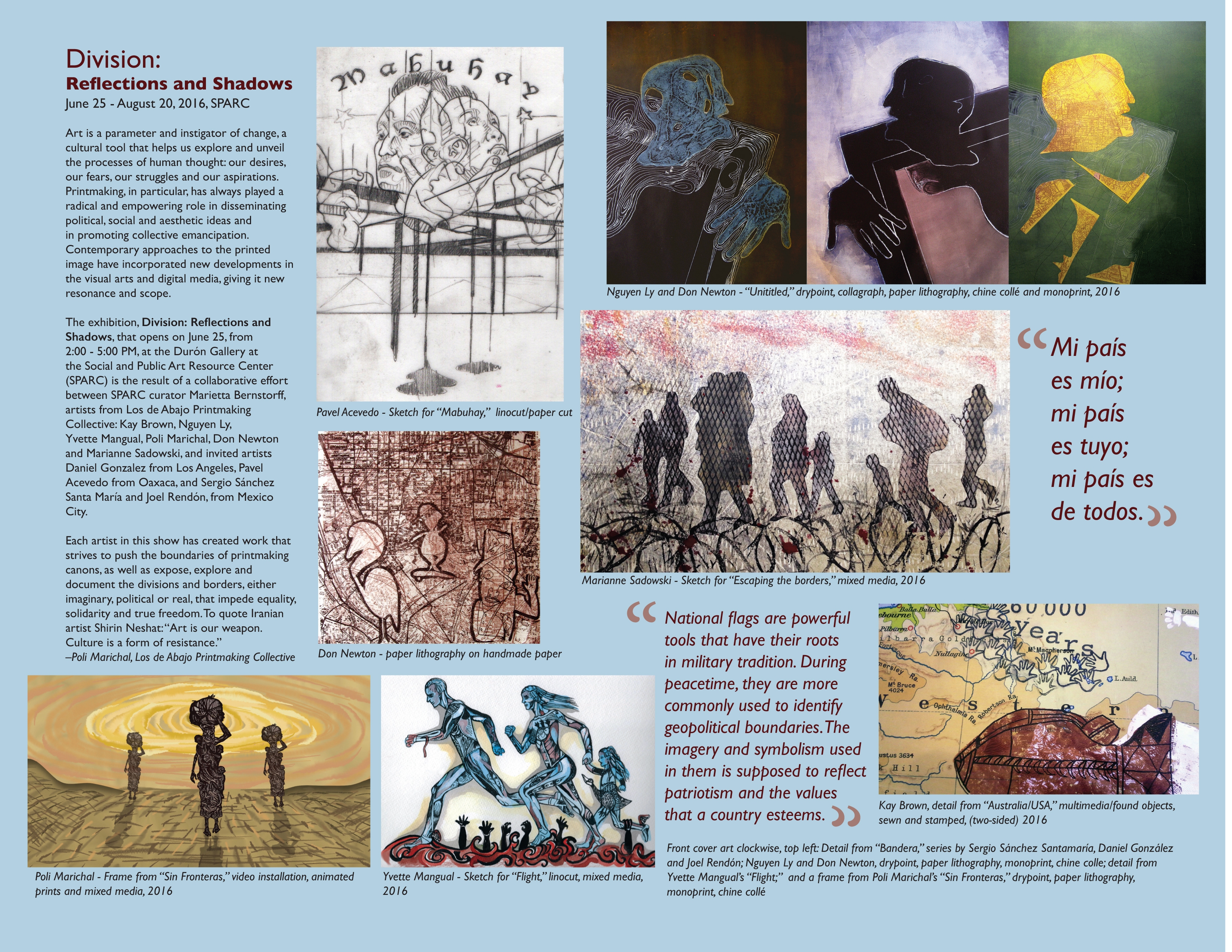