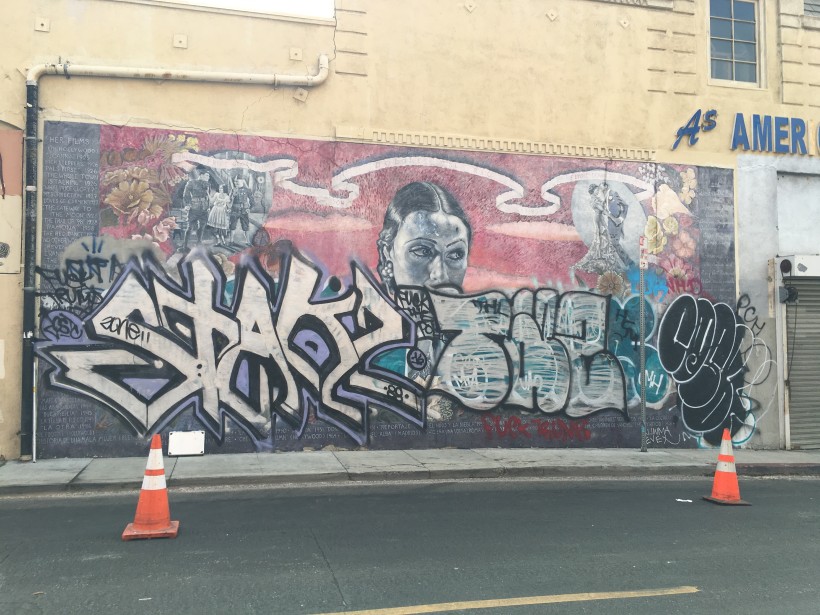 Over the past two decades, “Dolores Del Río” had been unfortunately vandalized numerous times. Restoring and up-keeping the quality is an important part of telling stories, especially the politically driven and socially conscious messages to which SPARC is dedicated. Batuc notes: “When we see a picture from the past, from another culture or from our history, we don’t necessarily know what that moment in our history was, or what is being represented. But if it is well-done, it is enjoyed.” Like Dolores Del Río herself, we must make sure that stories like hers are never forgotten – especially in a place like Hollywood, a city that runs on the adage, “You’re only as good as your last performance.” 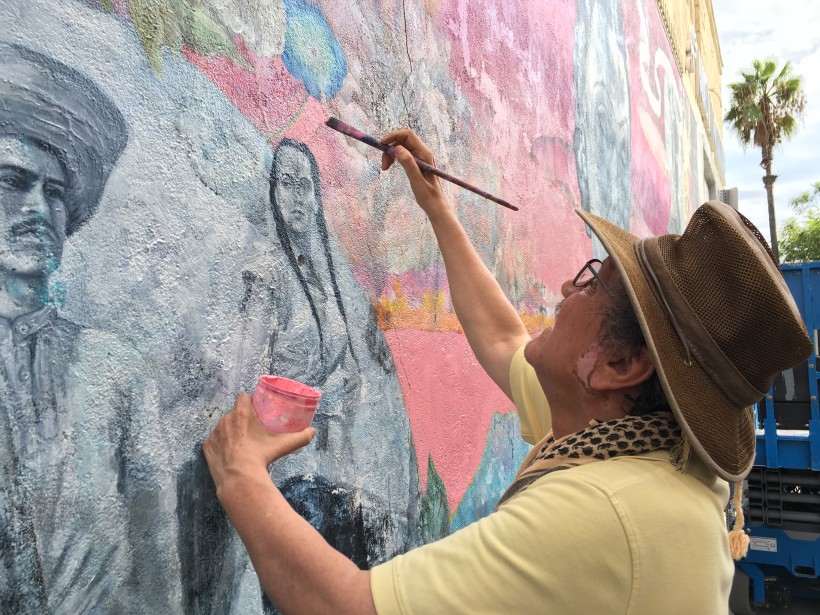 Alfredo de Batuc painting on “Dolores Del Río” mural for the first time in over a decade.

Alfredo de Batuc’s case of Guillain-Barré syndrome was extremely severe, to the point where “I was not able to do anything,” he says. “Not even take care of my basic needs.” With his ailment, it was nearly impossible to pick up a brush – much more to complete the physically demanding work of painting a mural. “Dolores Del Río” is actually de Batuc’s only mural – which is, in part, due to the challenging process of painting it. “I was not enamored of the process,” de Batuc admits.

Despite both the difficulties of painting a mural and de Batuc’s conditions, the painter returned to “Dolores Del Río” 26 years later, prompted by SPARC’s invitation to come and simply observe his piece’s restoration. But de Batuc says, “I couldn’t resist the temptation to do a little bit of work.”

For de Batuc, revisiting “Dolores Del Río” brings to him a different energy, a vibrancy that prevails far above the sickness that has kept him away from this work for over two decades. In many ways, it is the rebirth of his piece, a new life for his only mural. “It feels like [I’m] doing some archaeological work, trying to remember or discover the colors… It’s a different experience and [it’s] interesting to find out how much I had forgotten. And at the same time, it’s also interesting to know how much I remember… And after all these years, to finally go back and do something, it feels great.”

THE SYMBOLISM BEHIND “DOLORES DEL RÍO” 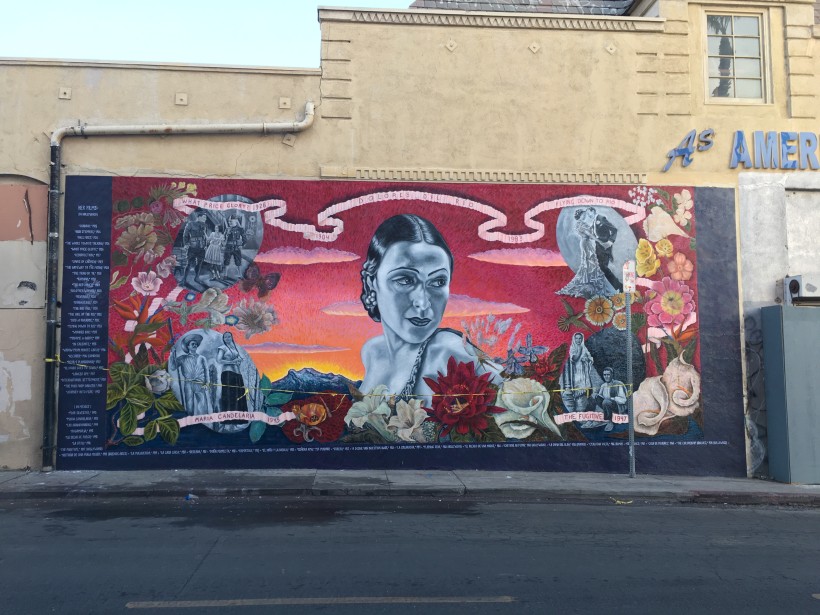 “Dolores Del Río” is part of SPARC’s Neighborhood Pride Mural program, whose intent is to create and represent the various cultural identities throughout Los Angeles neighborhoods. While it may not be a stretch to fathom how a 1920s movie star can be representative of Hollywood, the significance of the mural lies much deeper than the glitz and glam of the city. “In [the] Hollywood film industry, white supremacy is very mainstream,” de Batuc says. So when de Batuc responded to the call for artists for the Neighborhood Pride Program, he knew “that the subject matter was going to be Mexican—not necessarily about Mexican culture but about someone who was Mexican and contributed or was a prominent member of the Hollywood establishment in the past.”

“That’s why I chose Dolores Del Río, de Batuc continues. The painter says that even though actress Del Río was one of the highest paid stars during her time, her contributions to Hollywood were “conveniently ignored” due to white supremacy. Unfortunately, de Batuc observes that the issue is far from resolved. “A couple of years ago, when a Mexican won the Academy Award for Best Director … he was presented by a white supremacist [as a] son of a bitch.” De Batuc refers to the Director. “California passes itself as very progressive compared to the rest of the country… and we still have to deal with [instances like] that,” de Batuc says. “There’s no end in sight.”

In addition, the restoration of “Dolores Del Río” comes at an interesting time given the political tension and discriminatory rhetoric plaguing the Mexican-American community in the United States, as spurred by a certain presidential candidate. “There has never been a golden age in the United States for Americans of Mexican descent to arrive in,” de Batuc asserts. “We can only say that there have been worse times, and the current time [is] particularly toxic.”

MURALISM AS A MARKER 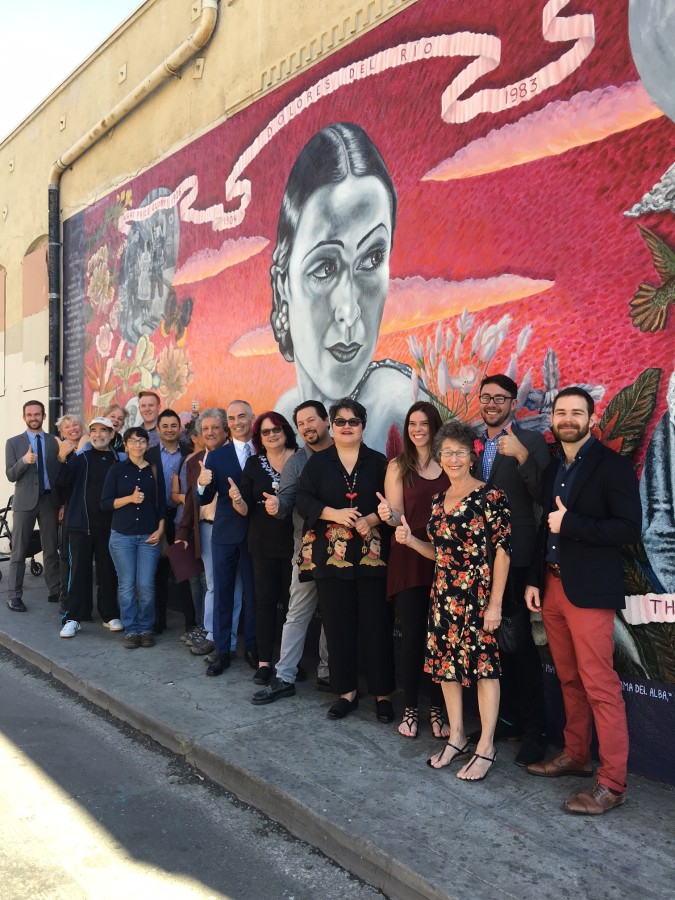 The murals of the Neighborhood Pride Program not only attempt to address political and cultural topics—like the ones mentioned above—through art, but they also bring the focus back to the communities in which the murals live. “There’s something personal about [murals],” de Batuc says. “Murals are markers that the community may identify with… They are landmarks.” “Dolores Del Río” is therefore not only a timely response to current events, but also an homage to the deep history of Los Angeles and of Southern California.

Through illustrating that the city’s lifeblood runs deeper than the whitewashed glamour of Hollywood, “Dolores Del Río” made its mark. And with the help of SPARC and the Citywide Mural Program, that mark will become a monument—here to stay for years to come.