Support another 40 years of art, political action, and social justice by contributing to SPARC today.

SPARC has remained at the forefront of advocacy through the arts since 1976, beginning with our most well known artwork, The Great Wall of Los Angeles. Since then, the organization has been at the forefront of designing and implementing model mural programs both locally (Neighborhood Pride) and internationally (The World Wall), presenting exhibitions around pressing issues facing our country, designing curriculum for schools and universities, restoring our legacy of production through the Citywide Mural Program and utilizing our very own MuralShield to preserve murals locally, nationally and internationally and advancing mural production through the integration of digital technology at the UCLA@SPARC Digital Mural Lab.

Info on lead image:
“Triumph of the Hearts” is part of the World Wall: A Vision of the Future Without Fear, a traveling mural conceived by Judy Baca consisting of 14 panels by artist teams in the United States, Finland, Russia, Israel/Palestine, Mexico and Canada. The installation of the murals demonstrates the transformation of an individual, a community and a nation towards peace and nonviolent resistance.

“Triumph of the Hearts” illustrates the transformative journey towards peace, where individuals of all races answer the call to action.  Casting the shadow of Mahatma Gandhi, an African-American youth sets off to join forces with a community of consciousness to confront the winds of war looming across the horizon.  He is empowered by their collective fore of women who contemplate his mission and hold in their hands the light of hope. 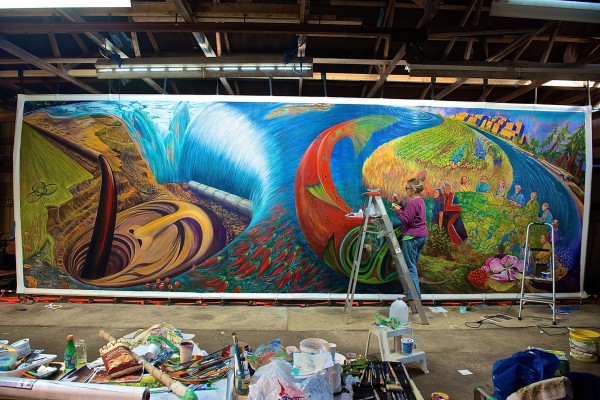 The World Wall: A Vision of the Future Without Fear Canadian Panel

The Inuit Send the World a Canary by Tania Godoroja Pearse

SPARC hopes to exhibit this panel along with the other 8 in 2017.