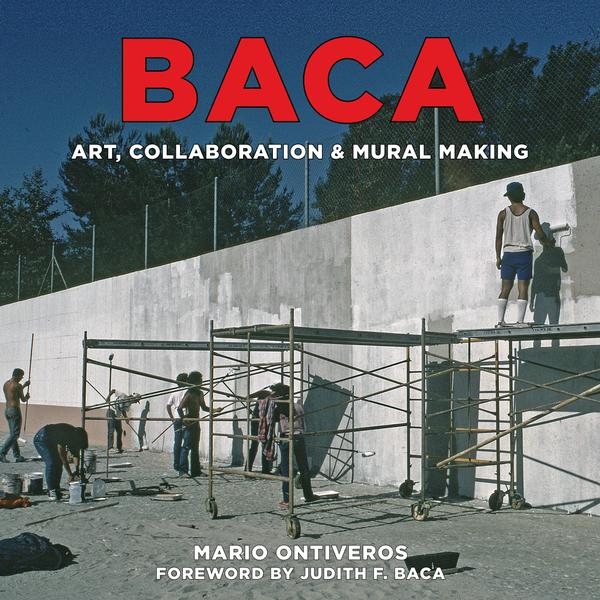 Hot off the presses!

For the first time in one volume, scholars from across America write about Judith F. Baca and The Great Wall of Los Angeles. Their captivating text explores the “why” of the world’s longest mural and the “how” of its creation. BACA: Art, Collaboration & Mural Making showcases Judith F. Baca, a woman so inspired by the work of Mexico’s Los Tres Grandes—José Clemente Orozco, Diego Rivera, and David Alfaro Siqueiros—that she collaborated with hundreds of Southern California colleagues and students to paint an unvarnished history of Los Angeles. The result: a mural that has been viewed by millions and has become a cultural landmark in the city it documents.

The Great Wall has been acknowledged internationally as one of the world’s great murals, and has been hailed for the methodology behind it. Judith F. Baca, a teacher, scholar, and activist extraordinaire, guided the team, introducing youth from the streets of Los Angeles to a world of art that not only expanded their minds and their individual passions, but defined a period of high muralism in the City of Angels. And just as importantly, Judith F. Baca taught these young people the importance of collaboration as a way to reach a common goal.

Scholars from across America join forces to study Judith F. Baca and The Great Wall, analyzing the why of its inception and the how of its creation. Edited by Mario Ontiveros, BACA: Art, Collaboration & Mural Making shares how Judith F. Baca was inspired by the work of Los Tres Grandes—José Clemente Orozco, Diego Rivera, and David Alfaro Siqueiros—and led her team to paint the history of Southern California. The result: a mural that has been viewed by millions, a cultural landmark in Los Angeles.

For everyone who treasures the mural as an expression of a community’s concerns and as a document of a specific time in history, BACA: Art, Collaboration, and Mural Making is a must-have work, a testament to the power of paint on a wall. With more than 200 images and a complete view of The Great Wall of Los Angeles as well as other important works by Judith F. Baca and other muralists, BACA: Art, Collaboration & Mural Making will be an important addition to every art lover’s library.

ABOUT THE AUTHORS: Mario Ontiveros is the editor and a contributor to BACA: Art, Collaboration & Mural Making. An assistant professor of art history at California State University, Northridge, his research examines political transformation, empowerment, and social belonging. He holds a PhD in art history from University of California, Los Angeles. ● Anna Indych-López is an associate professor of art history at City College of New York and The Graduate Center, CUNY, specializing in Latin American modernisms and Latin American and Latina/o contemporary art.  She is author of the monograph Judith F. Baca, UCLA Chicano Studies Research Center A Ver series. ● Andrea Lepage is an associate professor of art history at Washington and Lee University. Her research focuses on artistic production by U.S. Latina/o artists and investigates themes of erasure, retrieval, and cultural memory. She holds a PhD in art history from Brown University. ● Amalia Mesa-Bains is an internationally renowned artist, scholar, and curator. Throughout her career, She has explored Latina/o artists’ references to spiritual practices and vernacular traditions through altar installations, articles, and exhibitions. In 1992, she was awarded a Distinguished Fellowship from the MacArthur Foundation. ● Carlos Rogel is an interdisciplinary mural artist at the Social and Public Art Resource Center (SPARC), and a doctoral candidate at the UCLA Department of Chicana and Chicano Studies. His research at the UCLA@SPARC Digital/Mural Lab focuses on activist and arts-based methods of design and collaboration.

BACA: Art, Collaboration, and Mural Making is a companion publication to California State University, Northridge, Art Galleries exhibition:  The Great Wall of Los Angeles: Judith F. Baca’s Experimentations in Collaboration and Concrete,curated by Mario Ontiveros; October 14–December 16, 2017. It is part of Pacific Standard Time: LA/LA, a far-reaching and ambitious exploration of Latin American and Latino art in dialogue with Los Angeles (September 2017–January 2018) at more than seventy cultural institutions across Southern California. Pacific Standard Time is an initiative of the Getty. The presenting sponsor is Bank of America.