You Are Not Forgotten: Restored POW/MIA Mural Unveiled!

On May 27, 2016 of Memorial Day weekend, graffiti covered the POW/MIA mural in Venice, CA., honoring the fallen servicemen who served in Vietnam, originally painted in 1992 by artist and Vietnam veteran, Peter Stewart. The vandalism also covered hundreds of the 2,273 names of those missing in action and prisoners of war hand-painted by Mr. Stewart and several veteran volunteers. The graffiti also covered the National Veteran’s Foundation (NVF) toll-free number dedicated to veterans in need.

The Venice community was outraged and within days, several community members-from veterans to children-worked tirelessly to save the mural. Unfortunately, while some of the graffiti had been removed, several names of soldiers had also been erased. Rows of American flags and flowers were laid along the mural as families of POW/MIA searched for their relatives’ names on what was now an incomplete mural.

Fortunately, the culprit responsible for the vandalism had been disciplined and the efforts to professionally restore the mural were underway. The Venice Chamber of Commerce led the fundraising campaign that would fund the restoration, receiving grants from SoCal Gas, Snap Inc., and Venice Neighborhood Council, as well as many other community contributors. 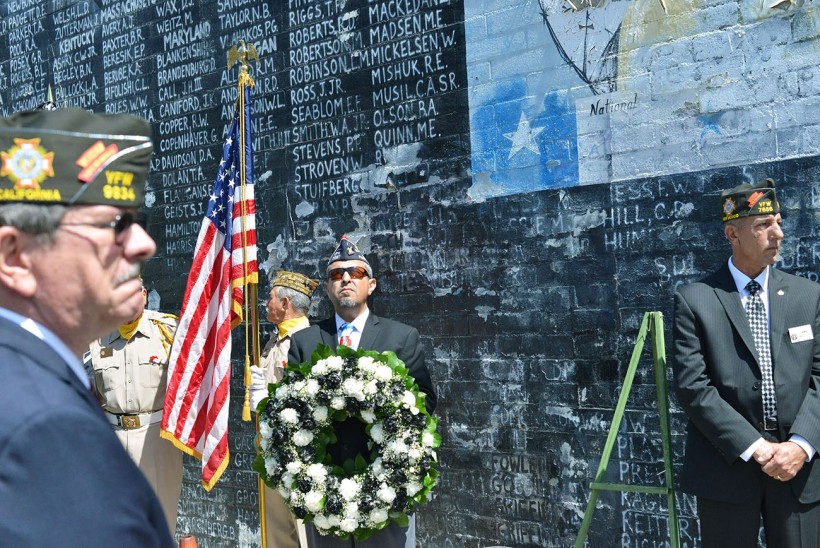 In April, B.J. Lawrence, national junior vice commander-in-chief of the Veterans of Foreign Wars of the U.S. (VFW), and several VFW members from local posts joined SPARC at a moving ceremony kicking off the restoration and spoke out against memorial desecration. SPARC’s Executive Director, Debra J.T. Padilla states, “SPARC is honored to have the VFW lay a wreath at the site as we begin the restoration of this beloved memorial. This restoration would not have been possible without the support of the Venice Chamber of Commerce, Venice Neighborhood Council, Councilman Mike Bonin and the community at large.” Following the wreath laying ceremony, SPARC’s restoration team went right to work as the mural itself had been visibly damaged by environmental wear in addition to the recent vandalism. 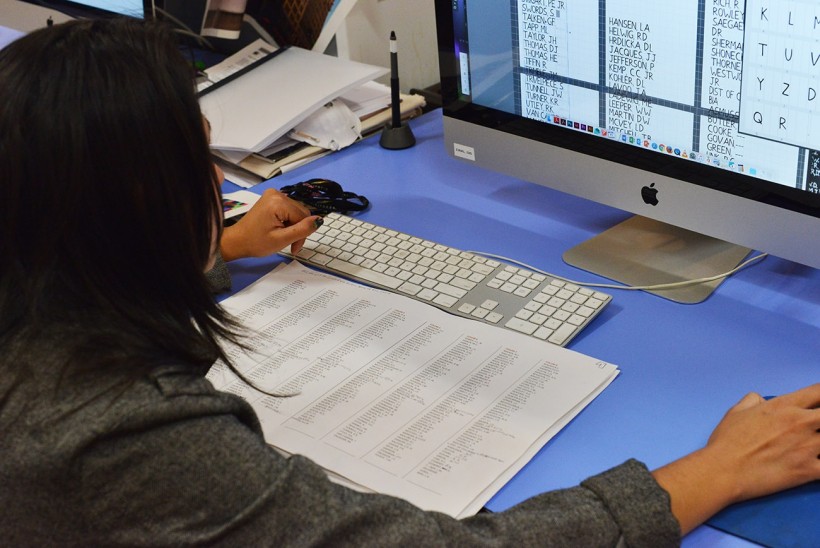 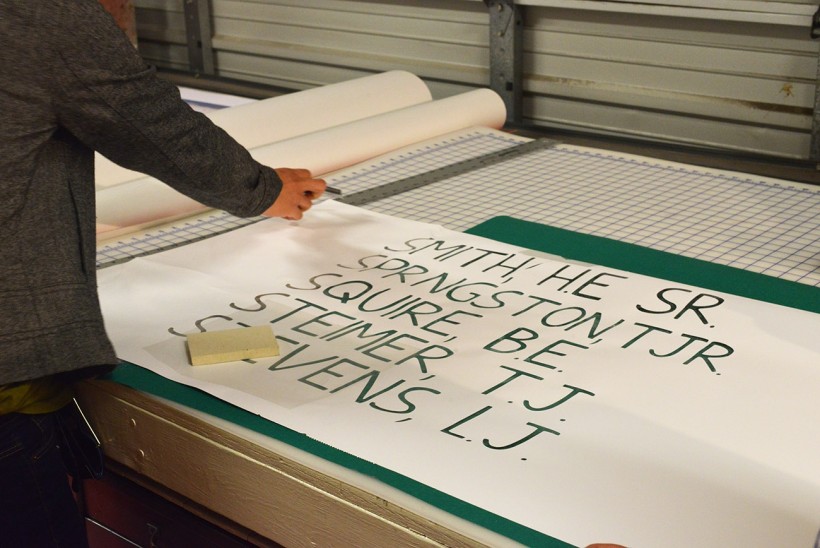 SPARC’s team began by spraying MuralShield, a SPARC innovation, reviving a lot of the original colors of the mural and consolidated the layers of paint allowing for the team to reattach pieces that were peeling back onto the wall. In the meantime, artists at SPARC’s Digital/Mural Lab conducted extensive research to recover the disappeared names of MIA and POW’s that were on the original mural. With a great deal of attention and careful measurements, the team led by SPARC Project Manager, Carlos Rogel, developed a font based on Stewart’s handwriting. They created digital stencil cut-outs of the one-thousand disappeared names that perfectly mimicked the original artists’ writing style. Along with SPARC’s team of artists, interns, volunteers and several supportive workers from IDEPSCA, muralist Joe Bravo joined the efforts by retouching the portraits located at the center of the mural. Soon enough, there were over a dozen helpful hands in the middle of Pacific Ave. working on this important memorial with pride, compassion, and the intention to honor those who fought for our freedom and their families. 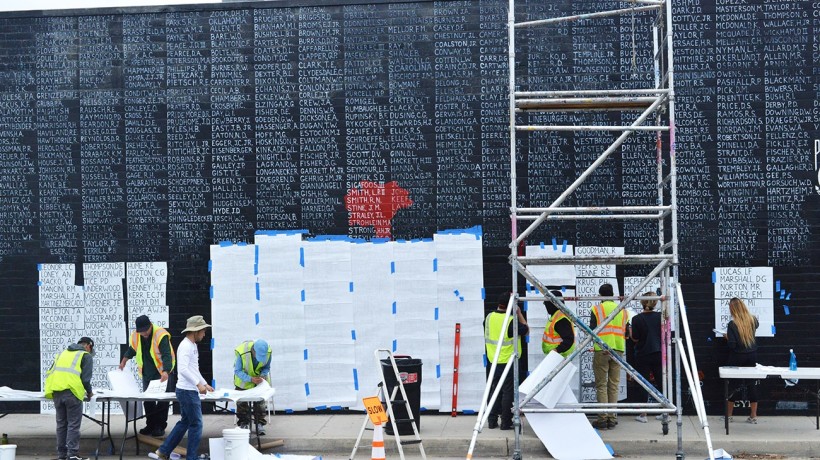 SPARC Restoration Team installs stencil cut-outs and begins to hand-paint names back onto the mural. 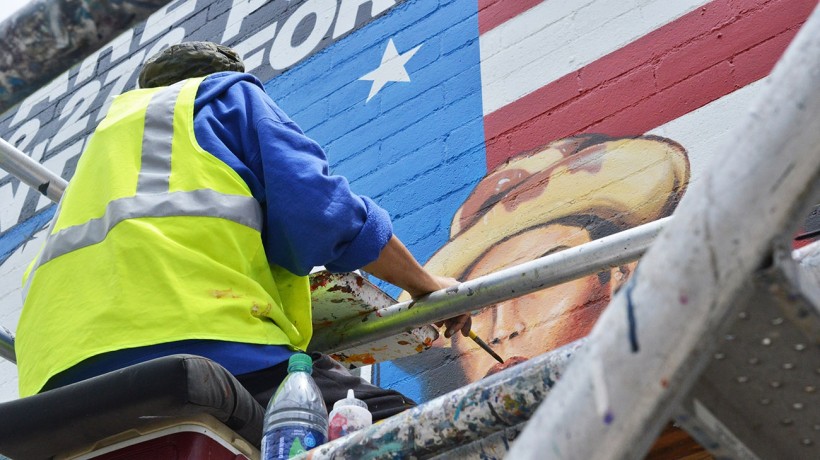 Joe Bravo touches up the portraits in the center of the mural.

At the time of the mural’s creation, Peter Stewart told the LA Times, “When I was painting, people were honking their horns and doing a thumbs-up motion… The more names I put on the wall, the more emotions I got from people.” Today, the SPARC restoration team received the same affirmations as they hand paint hundreds of names back on the mural leading up to the unveiling scheduled for Memorial Day, nearing 1 year since the vandalism. 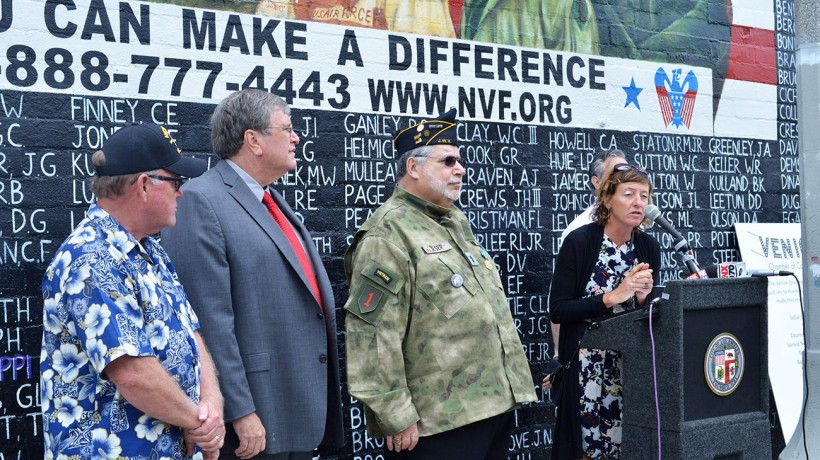 On May 29, 2017, countless Venice neighbors, families, and veterans gathered on Pacific Ave. to celebrate the return of the POW/MIA memorial and the return of hundreds of lost names on the mural. The unveiling ceremony began with an opening by the VCC mural restoration planning committee, Andy Layman, George Francisco, Kelly Layne, Les Himes, and Paul Jesser followed by a message from SPARC’s Founder and Artistic Director, Judy Baca. Judy Baca announced that the POW/MIA Mural will be coated with a two-part system using SPARC’s MuralShield and a sacrificial wax coating used to fight against weathering and vandalism. This two-part system is the same method SPARC uses on all mural projects designed for the conservation of fine art acrylic murals. She also notes that the mural will be digitized allowing the mural to travel if needed. Finally, Judy Baca introduces the team of artists, volunteers, and interns behind the restoration efforts led by SPARC Project Manager, Carlos Rogel. 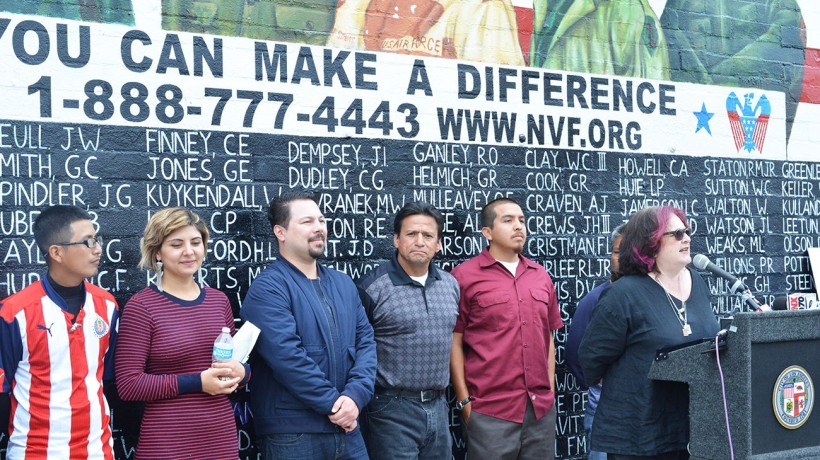 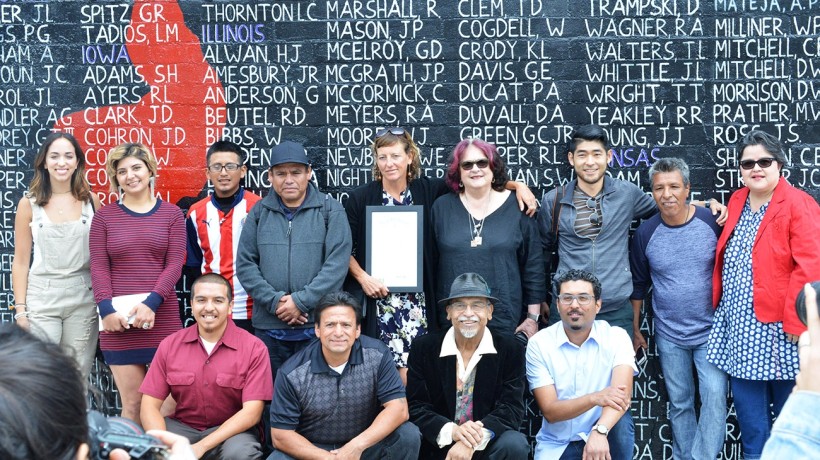 Also present in the crowd was Councilmember Mike Bonin who shared his gratitude and presented the Venice Chamber of Commerce with a certificate from the City of Los Angeles for their efforts that made the restoration possible. 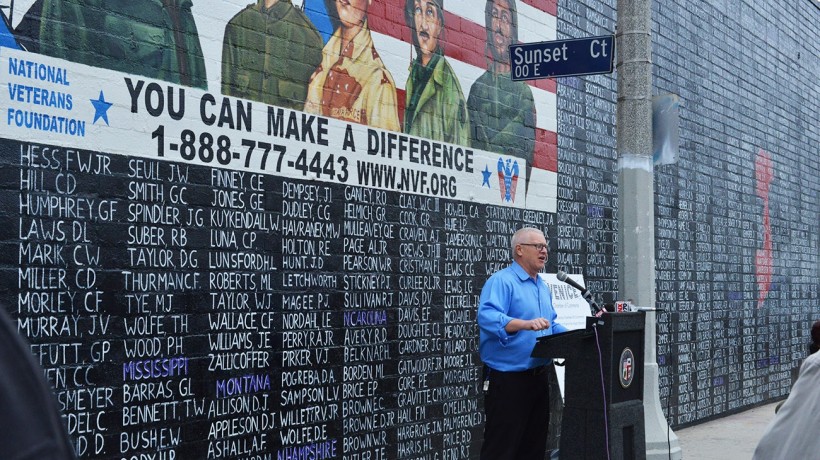 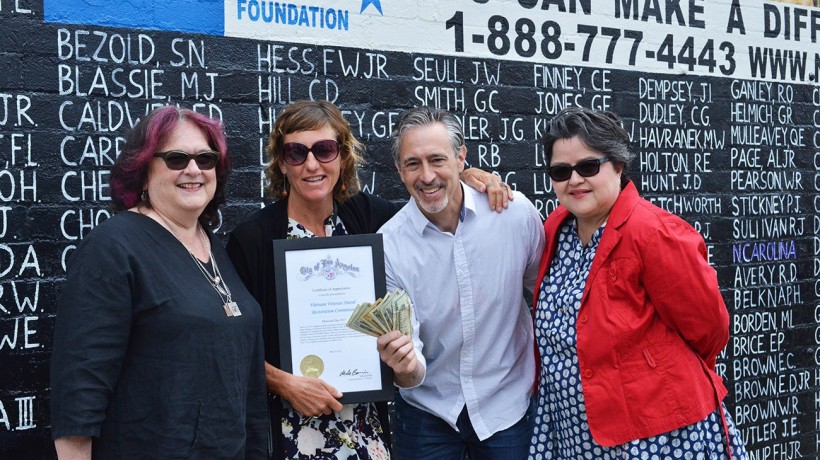 As VCC President George Francisco gave his closing remarks, the Venice community proved again that change begins by joining together. In a moving gesture, Venice neighbors began to donate money to support the conservation efforts for the POW/MIA mural. You can donate to preserve the mural for future generations through the GoFundMe campaign: https://www.gofundme.com/powmiamural 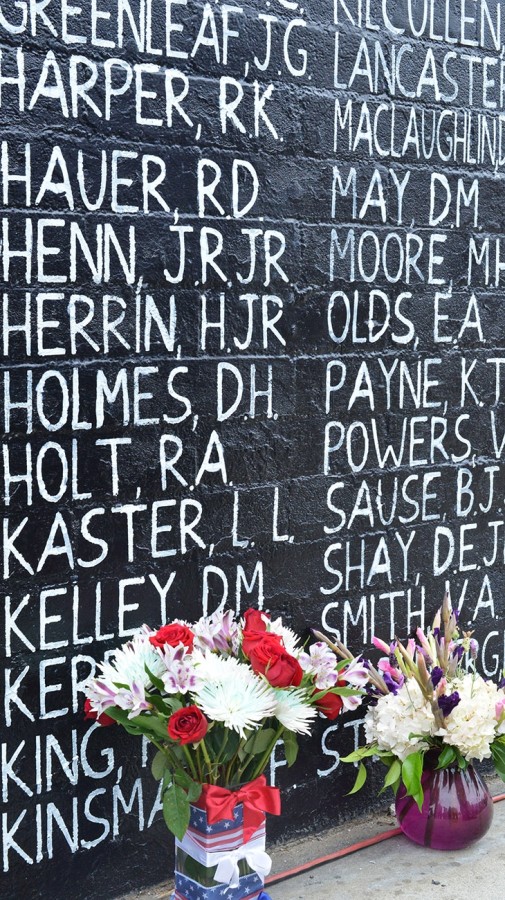 Flowers set along the mural during the rededication ceremony.