Restoring ‘The History of Highland Park’ – 2011

Restoring ‘The History of Highland Park’ – 2011

From The EastSider LA. By Nicole Possert:

AT&T’s former company, Pacific Bell, commissioned the work to be done by Barrio Planners in 1977, who in turn selected Judy Baca and a team of artists that consisted of Joe Bravo, Sonya Fe, Arnold Ramirez, Sonny Williams and others. Barrio Planners’ Frank Villalobos said “It weaves together the history of Garvanza and Highland Park with the landscape and people of the Arroyo Seco. It was designed to work in conjunction with the street trees that were also planted creating a 3-D effect.”

But there is another layer of history to this story. The original mural was done to “mitigate” the significant alteration and loss of the original 1920’s brick building that the stucco bunker covered as part of a seismic retrofit project. Local historian Charles Fisher remembers it as “a simpler design but similar to the Police Museum building on York Blvd, utilizing gold bricks.” At that time, neither the Highland Park Heritage Trust nor the L.A. Conservancy were not yet formed, But community sentiment for historic preservation took and the result was this mural a new layer in the community’s history. 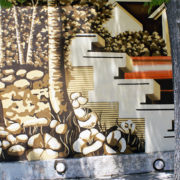 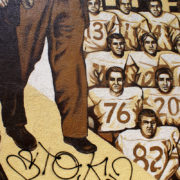 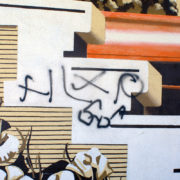