WATCH THIS GREAT VIDEO ON THE PROJECT!

On July 20, 2016, the CityWide Mural Program (CWMP) team, led by project manager Carlos Rogel, began the restoration process of La Ofrenda, located under a bridge on 2nd and Toluca in downtown Los Angeles. The piece was painted by Yreina Cervantez in 1989. Since then, the mural had been tagged with graffiti numerous times and completely covered by another mural.

ABOUT “LA OFRENDA”
Location: Under the bridge on Toluca and Second St. in Downtown, Los Angeles 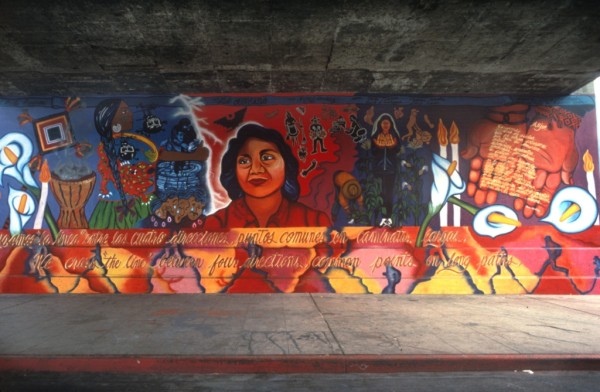 “‘La Ofrenda’ had actually been fully restored in 2012 in anticipation of Dolores Huerta’s birthday,” Project Manager Carlos Rogel, who leads and supervises each undertaking of the CWMP, recounts. According to Carlos, the mural was protected with an anti-graffiti coating upon its restoration. However, the mural was vandalized after the coating. Although the graffiti was removed from the mural, the work was left uncoated and thus, unprotected from future acts of vandalism. Due to funding complications with the contractor hired to remove the graffiti, the mural continued to be tagged over during these setbacks. 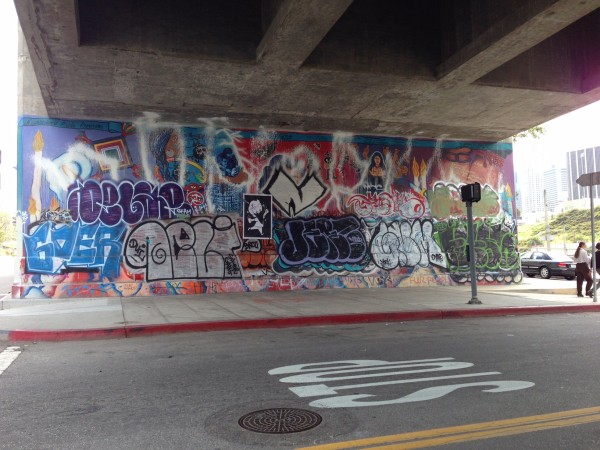 Despite these complications, SPARC continued to advocate for the restoration of “La Ofrenda”. Due to these efforts, the mural was added to the CWMP’s list of murals to be conserved in 2015 with the support of the Department of Cultural Affairs. “Through our advocacy and community outreach, we notified local groups that La Ofrenda was scheduled for restoration,” Carlos says.  However, a local pastor hired a graffiti artist to paint over the entire artwork, leading to a complete shift of the CWMP’s plans.

“[The muralist] Yreina was of course upset after hearing of the news,” Carlos remembers. After multiple meetings with the local council member’s chief of staff, and later meetings with the Pastor, the incident cleared. “[The pastor] admitted that the whole incident was a terrible mistake on his part and offered to support the conservation efforts in any way he could. He apologized to [Yreina] numerous times and has since then been very helpful and generous in supporting the restoration of ‘La Ofrenda.’” 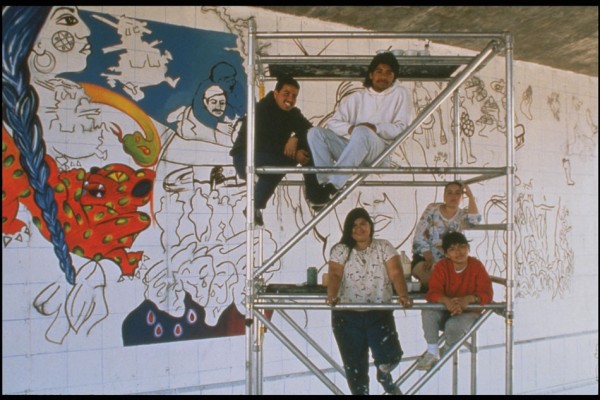 Yreina Cervantez (standing in the center of the scaffolding) during the painting of the original mural in 1989.

The mural is one of nine murals, all produced through SPARC’s Neighborhood Pride Mural Program, that have been distinguished by the Department of Cultural Affairs as “historically significant.” Ofrenda means “offering” in Spanish, and in the case of the mural, the ofrenda is for Dolores Huerta—co-founder of the United Farm Workers of America and a prominent figure in the United Farmer Workers Movement. 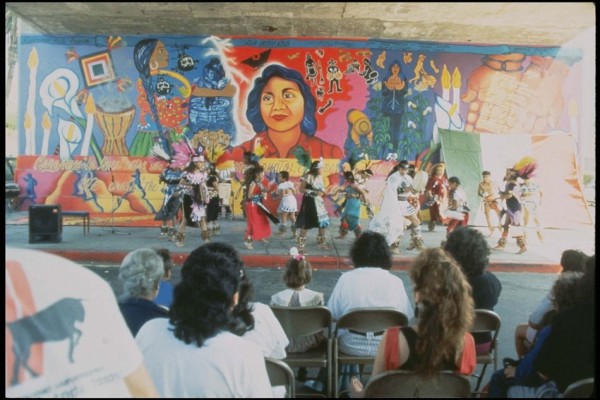 “I grew up in the neighborhood and I was able to enjoy the mural in its original condition,” Rogel remembers. “As a young person, I remember relating to the artwork and being attracted to the content of the work because it integrated familiar imagery and narratives of Central American refugees.” Rogel, who is a second generation Salvadoran-American, resonated strongly with the subject of the mural, which he says “provided an early example of how artists work with social and political content that is derived from the experiences of immigrant and refugee communities.”

The restoration of the mural is as timely as its creation was in 1989. “The reason I think it’s really important to restore this mural in this time and place,” artist Yreina says, “is because communities change, and as you know, this community is undergoing a great change in terms of gentrification… It’s really relevant and important for us to recognize the different communities that have been here before.” 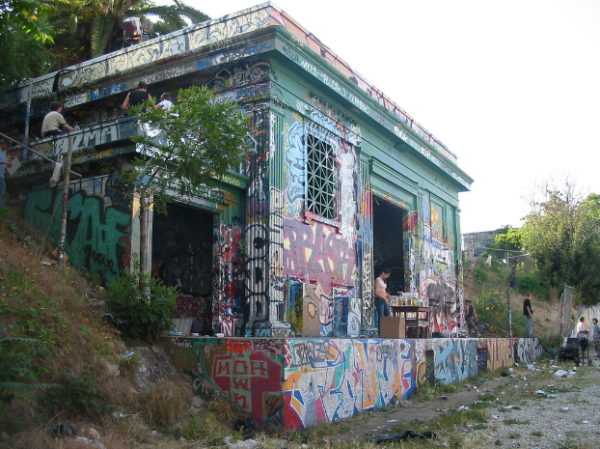 She mentions the now-demolished Belmont Tunnels—a tunnel filled with graffiti art and murals—which were replaced by the Belmont Station Apartments. “People would come all the time [to the tunnels], and it was just really exciting to see all the activity and all the murals that were painted across the way. Unfortunately, that doesn’t happen anymore. It’s not there.” The graffiti tunnels are largely cited as the origin of graffiti art, an integral, historical component to muralism.

“La Ofrenda” is thus essential to the neighborhood: it preserves a moment in time and serves as a reminder of the city’s origins. 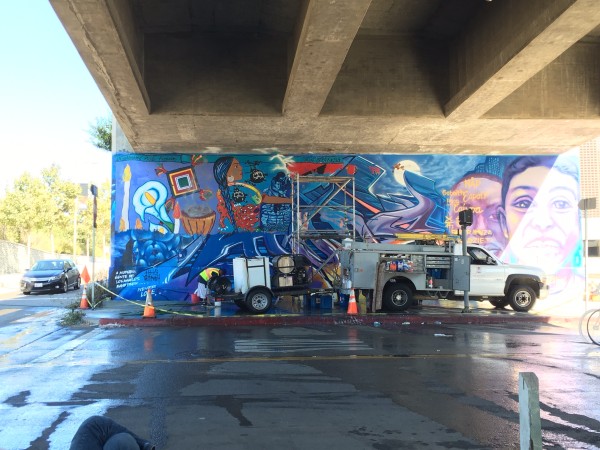 Mural painted over, with left side of La Ofrenda starting to peak through SPARC’s MuralShield Process.

CWMP Team in front of the mural which was painted over “La Ofrenda.”

The Team begins with a preliminary visit, during which they examine up close exactly what has happened to the mural and how they can best treat it. With the technology of the Digital Mural Lab, the Team is able to preserve the existing mural in a digital file and send it to the original artist, enabling them to install their mural anywhere they’d like. “We created a high resolution image of the previous aerosol mural [that was painted over ‘La Ofrenda’] to document the last best state of the artwork,” Carlos says. “We intend to support the local group in finding a new location for the aerosol mural.” 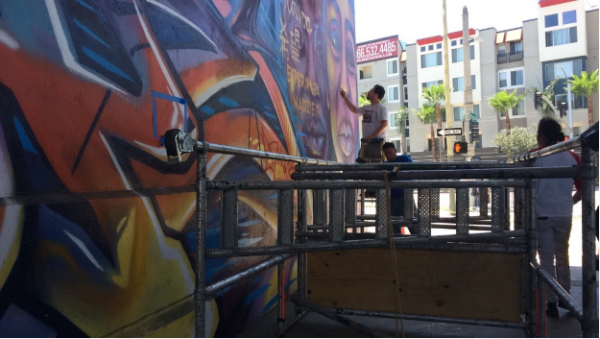 Project Manager Carlos Rogel with the CWMP at the site of “La Ofrenda”.

Next, the restoration begins. “For ‘La Ofrenda’, we used a method that I call a ‘controlled delamination’,” says Carlos. Through this process, the Team uses special sets of gelled ecologically safe solvents—one of which encourages delamination of surface paint layers, one color at a time, while another set affects the binder in paint, causing it to “shrivel and craze.” 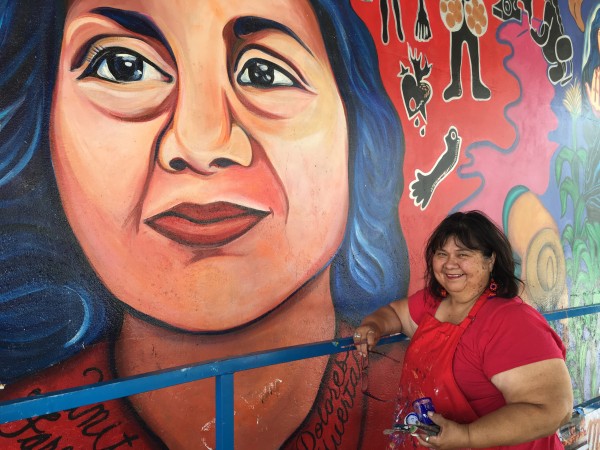 Yreina Cervantez working on the mural in 2016.

“It is important to note that unconsolidated paint layers are never actually chemically bound to each other. They only rest on top of each other,” Carlos explains. “One can carefully peel back paint layer by paint layer with just the use of water at a specific temperature.” With this method, the Team was able to remove the existing mural while preserving Yreina’s mural underneath.  “It is very similar to an archaeological dig site: you carefully remove the sediment that surrounds the artifact you are interested in preserving.”

To protect the mural, the team uses MuralShield, a system that uses a single-treatment consolidant to shield the mural against light damage, delamination, oxidation, and efflorescence. “The system is very well designed to accommodate small or large mural projects, as well as aged or new murals,” explains Carlos. (To learn more about MuralShield, visit SPARCinLA.org/MuralShield.)

For Yreina’s mural, the conservation work took three days, thanks to the diligent and speedy work of the CWMP, under the leadership of Carlos Rogel. Yreina will be completing the in-painting repairs of the mural over the duration of ten days. 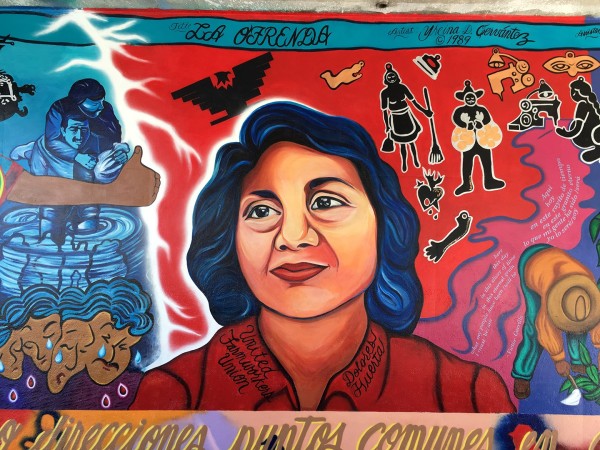 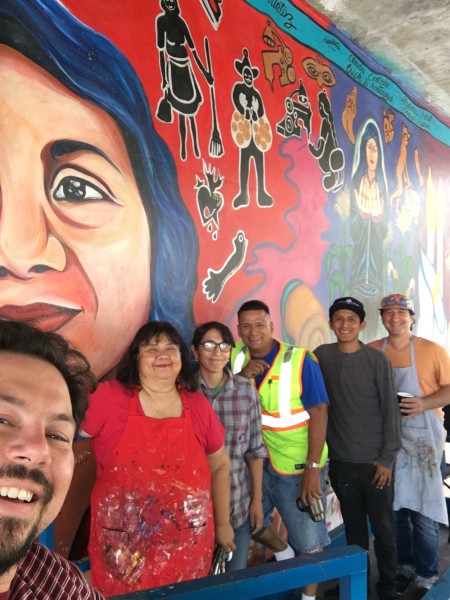 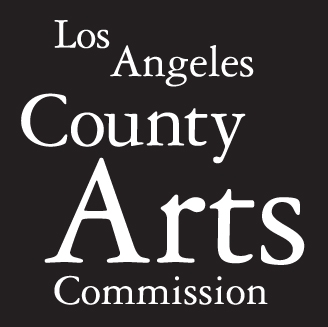