SPARC’s mission is to produce, preserve, and promote activist and socially relevant artwork; to devise and innovate excellent art pieces through participatory processes; and ultimately, to foster artistic collaborations that empower communities who face marginalization or discrimination.

The ideas we propagated have gained credibility over the years: 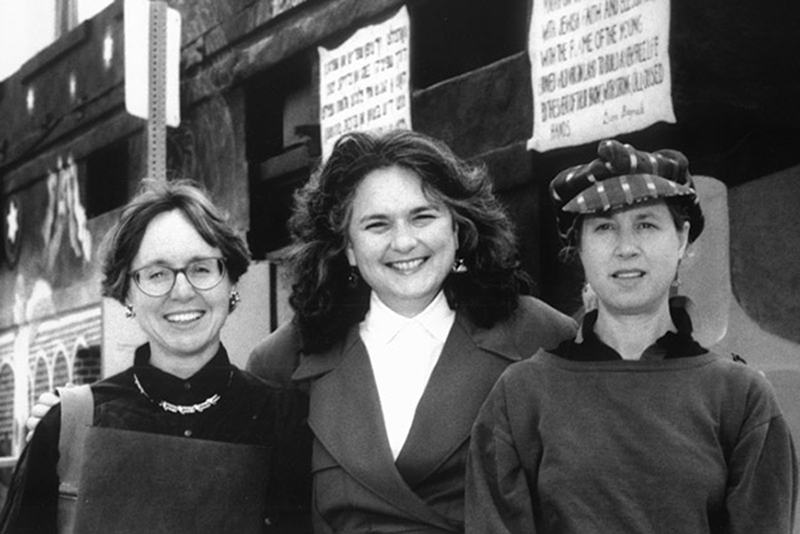 SPARC was born in a time of change – the 1970s. It has, since its inception, been a catalyst for social change through the arts and a home for artistic innovation. Being a catalyst has often meant handling the many currents that flow through historical events at the moment they are occurring and working outside of typical art venues in the places where people live and work.

SPARC is a facilitator – finding ways to tell richly textured stories that help community participants and artists achieve a measure of change and transformation. SPARC endeavors to communicate to the larger public – the means of communication may take many forms, from built architectural monuments, to murals or to new technological spaces such as the Internet. As with many organizations that articulate new visions and push the edges of content and aesthetics, SPARC is determined to be sustainable and relevant to the time we are living.

Since it was founded in 1976 by Chicana muralist and Distinguished UCLA Professor Judith F. Baca, Filmmaker/Director Donna Deitch, and Artist/Teacher Christina Schlesinger, SPARC’s artistic direction was formulated with the concept that the arts could be engaged with the most important issues of our time and that ordinary people/community members could be participants in the arts. SPARC chose to amplify the voices of those marginalized in our Los Angeles communities and to provide a new vision of what art could do: women, people of color, poor and working people, day laborers, youth, prisoners, etc became the focus in our programming. We believed, then as we do now, that art can exist in places where people live and work, therefore we are focused on a new “public art.” Our works are monuments that rise out of communities; memorializing what the people choose to remember.

Since 1976, we have taken the work to blighted streets in the inner city of Los Angeles and to concrete flood control channels; scars where our rivers once ran. We painted a 1/2-mile of the river with murals with 400 youth, built parks in vacant lots, hung photographic tapestries in senior citizens centers, and built sculptures for children to play on in vacant lots and produced hundreds of murals. Los Tres Grandes of Mexico, the popular culture of low riders, tattoos and political street writing, transformed by the aesthetics of each changing cultural group with whom we work, informed our sense of beauty and order. We continue to capture the rhythm of the streets in giant works that place an ethnic face on a city where a 129 languages are spoken in our schools but whose life and aesthetics are often not represented in the cities physical and aesthetic environments.

This concept, now more accepted, was radical in an era of “arts for arts sake” thought, during which we pioneered these aesthetic values. However, the need for our work has steadily grown with the massive demographic shifts affecting our city and country. Still today, no issue raised by a community is too difficult for us to approach with an artistic solution. In 1977, we opened the center with the ‘Jail House Break’ celebration and examined our own home, the former Venice Police Station and its historic use.

Today we have contemporized our historic processes through the incorporation of technology in our UCLA@SPARC Digital/Mural Lab where we produce large scale imagery both painted and digitally printed, work with communities across the country and internationally over the internet, and continue to innovate new materials that seek permanence in outdoor environments. Our programs have been widely emulated across the country and internationally as we continue to stay on the cutting edge of innovation of large-scale public art works and community interactive processes. Organizations like SPARC maintain the spirit and substance of transformation we need no more than ever in our city and country, by visualizing change through the arts and by engaging our communities in much needed civic discourse.

1) 1976-Present: The Great Wall of Los Angeles 1/2 mile-long Mural/Education Project is one of Los Angeles’ true cultural landmarks and one of the country’s most respected and largest monuments to inter-racial harmony. SPARC’s first public art project and its true signature piece, the Great Wall is a landmark pictorial representation of the history of ethnic peoples of California from prehistoric times to the 1950’s, conceived by SPARC’s artistic director and founder Judith F. Baca. Begun in 1974 and completed over six summers, the Great Wall employed over 400 youth and their families from diverse social and economic backgrounds working with artists, oral historians, ethnologists, scholars, and hundreds of community members.

2) 1988-2002: Neighborhood Pride, a program initiated and developed by SPARC and sponsored by the City of Los Angeles Cultural Affairs Department produced 105 community artworks in every ethnic community in Los Angeles, commissioned 95 artists and trained over 1800 youth apprentices. In 2002 alone (the last year of the program), SPARC conducted 80 community dialogues citywide with community participants determining the placement and content of 15 new large-scale public artworks. These works confronted some of the most critical issues in our city such as; the on going migration and integration of the Central Americans particularly in the 1980’s to Pico Union from el Salvador, Nicaragua and Guatemala, and the changing demographics in our schools, creating the phenomena of “ chocolate schools in vanilla suburbs” which has resulted in the demise of the age old “neighborhood school’ concept in many Los Angeles communities.

3) 1990-Present: World Wall: A Vision of the Future Without Fear, conceived by Judith F. Baca, consists of seven 10’ x 30’ portable mural panels on canvas. This 210’ mural addresses contemporary issues of global importance: war, peace, cooperation, interdependence, and spiritual growth. As the World Wall tours the world, seven additional panels by artists from seven countries will be added to complete this visual tribute to the “Global Village.”

4) 1976-Present: The Mural Resource and Education Center (MREC): In the course of our community cultural development work we have amassed one of the country’s largest collections of written and visual information about public art, including an archive of over 60,000 mural slides. Hundreds of students, educators, scholars, artists and art historians avail themselves of the MREC’s resources each year. In addition, the MREC sponsors public mural tours, giving visitors and Angelenos alike an opportunity to view the city’s unique outdoor gallery.

5) 1976-Present: The Dúron Gallery: SPARC’s headquarters in the 10,000 square foot facility of the 1929 old art deco Venice Police Station in Venice California houses a converted cellblock exhibition space. Exhibitions take place year round in the facility, which is well known for exhibitions of socially relevant work and the work of children and youth. SPARC’s programming recognizes the vital function the arts play in any social justice movement.

6) 1996-Present: The UCLA@SPARC Digital/Mural Lab is the leading research and production facility in the country devoted to the creation of large-scale digitally generated murals, educational DVD’s, animations, community archives and digital art. In its community setting at SPARC’s headquarters in the old Venice jail, the Lab develops new methods for combining traditional mural painting techniques with computer generated imagery, collaborates across distance with local, national and international communities to create public art expressing the concerns of diverse communities, and develops new methods of preservation and restoration for mural art through use of digital prints and new materials.

7) 2005-2009: Otis School of Art & Design/Digital Media lab for High School Students @ SPARC: O TEAM: Otis Teens, Educators, Artists and Mentors: O TEAM prepares Venice youth for a productive life through skill-based art and design education and mentoring to facilitate their personal development and entry into higher education and the workplace. The O TEAM program is designed to support the aspirations of young people, instill core values, and reinforce self-esteem by providing them with the tools to succeed. O TEAM meets downstairs in SPARC’s basement; the students fondly call their group “Underground Roots.”

8) 2008-Present: Planet Siqueiros Peña, is inspired by Mexican muralist David Alfaro Siqueiros and the South American musical Peñas, which produced a wave of music that utilized old rhythms to express new realities. The movement emerged during the 1960s in Chile and Argentina during the reign of oppressive military governments that forbid artists to assemble. The Peñas began in private homes where poets and musicians could discretely come together to share food and wine along with their songs of despair and hope. During the following decades many musicians were forced into exile, and the Peña spirit migrated with them.

9) 2008-Present: Mural Rescue Program, SPARC finds itself in high demand by the public for the maintenance and protection of hundreds of public art works. The truth is there is zero funding for staff, educational in/out reach, community organizing, and restoration, hiring neighborhood youth, taggers and graffiti artists. To bring awareness to the current plight of murals destroyed, neglected or tagged, SPARC created a specific program to tackle the need of saving one mural at a time when funding becomes available.

The impact of SPARC’s work is best voiced in that of a community partner. Works such as the CARECEN mural, the first significant public work created in Los Angeles about the migration of Central Americans into the Pico Union district of Los Angeles represent the partnerships with community groups who wish to visualize the issues affecting their community. Regarding the experience at CARECEN Angela Sanbrano Former Executive Director of CARECEN writes, “SPARC’s work parallels the organization’s belief in art as a reflection of the lives of America’s diverse ethnic communities. Especially heartening has been the organization’s development of a community approach in the creation of art for the betterment of society. SPARC’s work with CARECEN empowered participating youth, enabling them not only to play an active role in the decision process, but also to work with their parents, professional artists, ethnologists and scholars. This is an experience that has enriched their lives while creating meaningful change in the Central American community itself. By encouraging students to take responsibility for their community and their own individual development, SPARC has enabled them to grow in new and exciting ways.”