Sponsored by SPARC’s Neighborhood Pride Mural Program in 1995, the Gintong Kasaysayan, Gintong Pamana (Filipino Americans: A Glorious History, A Golden Legacy) mural by artist Eliseo Silva is located on 1660 Beverly Boulevard, Los Angeles, at Unidad Park and is the nation’s largest Filipino American mural standing at 145’ by 30’ ft. Unidad Park was first transformed into a community garden called the Candy Chuateco Community Garden in 1993, sponsored by Search to Involve Pilipino Americans (SIPA), hosting sites for organically grown vegetables and fruits, as well as cultivating relationships between youth and older residents of the community. Eventually, it would be converted into Unidad Park (“Unity” Park) through the Los Angeles Neighborhood Land Trust where community organizers hold series of programs and events year-round.

The mural is now in a condition that demands critical attention! With your contributions, the Social and Public Art Resource Center’s (SPARC) Mural Rescue Program will restore the mural with Eliseo Silva’s help to its original full vibrancy.

October 24, 2015 marks the 20th Anniversary of the Gintong Kasaysayan, Gintong Pamana (Filipino Americans: A Glorious History, A Golden Legacy) mural and will be celebrated in conjunction to the annual Larry D. Itliong Day celebration at Unidad Park, the first annual Filipino-themed celebration of the nation`s first and only Filipino-themed public park-known as *Unidad Park* with a Filipino mural.

The mural itself portrays events and leaders from Filipino and Filipino American history. It is widely recognized as the first memorial honoring Filipino American farm workers and is now considered the largest, most famous Filipino American artwork by Asian American History and Culture: An Encyclopedia (2010 by Huping Ling and Allan Austin). During the campaign to designate the district (where the mural was located) as a Filipino town, the landmark was consistently cited as visible cultural representation of Filipino American heritage and played a pivotal role in the naming of the area as Historic Filipinotown on August 2002. Even today, the mural is listed as one of the top three destinations of the HiFi tours: a Jeepney ride around Filipinotown, a visit to the VALOR monument and a stop for a mural tour at Unidad Park`s Gintong Kasaysayan mural. 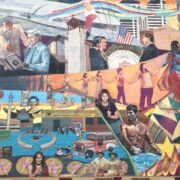 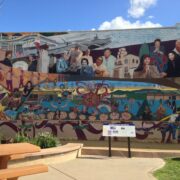 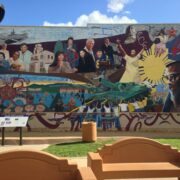 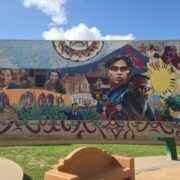 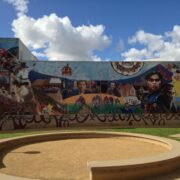 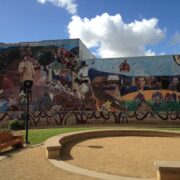 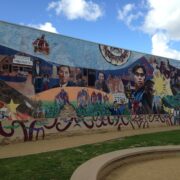 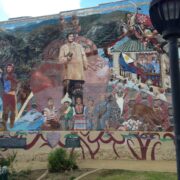 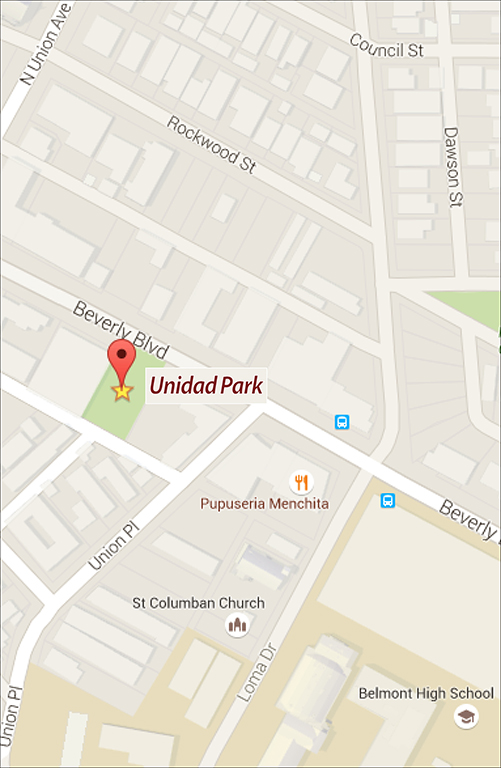 Click Here for Directions to “A Glorious History, A Golden Legacy” by Eliseo Silva

The mural has been widely reproduced as book covers, posters, framed giclee prints and t-shirts including as an individual work of art in venues such as the Los Angeles County Museum of Art, the Japanese American National Museum and the Smithsonian National Museum of American History. Two major nationally-travelled exhibits curated and produced by the Smithsonian featured the Gintong Kasaysayan mural: Singgalot (The Ties That Bind): The Filipino American Story ( Travelling Exhibit celebrating the Filipino American Centennial in 2006); and I Want The Wide American Earth: An Asian Pacific American Story. A framed giclee print of the mural was the City of Los Angeles official gift to the President of the Philippines during his official visit to LA in 1997. The mural was also recognized by the Department of Cultural Affairs with the Award of Design Excellence and the National Centennial Commission of the Philippines included a poster of the mural in the Philippine Centennial Time Capsule, which will be exhibited during the country`s Bicentennial Celebration in 2098.

Gintong Kasaysayan, Gintong Pamana (Filipino Americans: A Glorious History, A Golden Legacy) backdrops Unidad Park, an integral addition to Historic Filipinotown as a shared backyard space for the community. Through this, Eliseo powerfully commemorates the Filipino culture while providing a visual link to Filipino roots and a means to assert their identity as a people. With the annual state-wide celebrations of Larry Itliong Day now signed into law by Gov. Jerry Brown, the mural site and images relating to the legacy of Itliong and the Filipino American farm workers who persevered, the mural will see a higher demand for its use as an iconic image and as a site of public memory.

Unfortunately, in recent years, murals have suffered neglect in the public environments of Los Angeles. Gintong Kasaysayan, Gintong Pamana, in particular, has faded and suffered delamination damage. The efforts will support the mural’s restoration and preservation services for years to come all the while heightening community awareness around the cultural, historical, and institutional memories that Silva visually recounts.