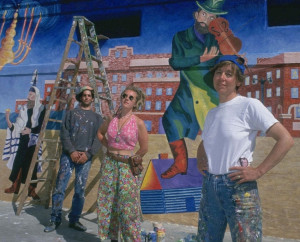 SPARC is very excited to be hosting our co-founder, Christina Schlesinger for the conservation of “Chagall Returns to Venice Beach” at the Israel Levin Senior Center. She will join our CityWide Team beginning Monday and complete the last remaining repairs by December 22nd. Before her arrival, we asked Christina a few questions about what it was like to work on the original mural in 1991, and her later restoration in 1996. The mural is part of the Neighborhood Pride Collection of 105 murals done for the City of Los Angeles sponsored in part by the Department of Cultural Affairs and dozens of community-based organizations, schools, and private businesses.

SPARC: Christina, thank you for taking time from your busy schedule in preparation for the restoration of “Chagall Returns to Venice Beach”. It has been quite a few years since you completed the mural. Could you tell us, what were your most memorable moments while working on the mural?

Christina Schlesinger: Well, there is no short answer as it is a very large mural and I painted it twice, in 1991 and in 1996. Each time the project took 2-3 months. I have SO many stories. I don’t even know where to begin! If I was to recall an oral history of “Chagall Comes to Venice Beach” (1991) and “Chagall Returns to Venice Beach” 1996, it would have to be through the people and organizations that helped me paint it. Of course, Judy Baca and SPARC immediately come to mind. I had been involved with SPARC since the 70’s. Rick Barnett and Eric Gordon were also inspirational in creating the mural. Rick Barnett was my dear and close friend, my neighbor, my advocate, who moved with his boyfriend Eric Gordon to LA in 1990. Rick began a job working for Jan Baum and Eric for SPARC. They moved into an apartment onto Speedway right behind the Israel Levin Center. I think it was Eric who thought of approaching the Center to see if they were interested in a mural and Rick proposed the idea of me coming out to do it.

The project became part of SPARC’s Neighborhood Pride Program and I prepared a drawing of my proposal for the wall. Eric had suggested my referencing Chagall and found motifs and themes – the flying fish, the fiddler etc., and I put them in the landscape of Venice – the boardwalk, the beach, the sky with references to specific architecture (the pavilions) and buildings (the arched buildings on Windward, the one remaining synagogue on the boardwalk, etc.) I lived with Rick and Eric the months I painted Chagall the first time in 1991. It was so convenient to the wall, and it was so fun living with them even though I slept in a very small cubby on their loft floor. I did not know it at the time, but Rick had AIDS. This was early on in the AIDS epidemic and he was a very private person. Rick died about 6 months after I finished the wall, and I regret every time I think about it that I was not there for him.

Dora Bayrack was an elderly poet whom I met one day while painting. She insisted upon adding the poem that is in the mural, which she wrote in English and Yiddish describing the voyages of Jewish immigrants to the US; her daily monitoring of the progress of the wall – she stalking the wall every day walking slowly but vehemently with her cane, full of daily critiques and questions! We had tea at her house in a nearby senior citizen housing complex.

Bill was a vet and was homeless, and painted angels. He came up to me one day with his tiny angels and asked if he could put them on the wall and I said of course but they needed to be bigger and he said he didn’t know how so I showed him how to grid the angel. We gridded a space for him on the wall and he was good to go. He brought these wonderful small strange paintings to show me and I bought several magical pictures, filled with strange and mystical imagery. I paid him $10 or $20 for the paintings he brought me. I also remember driving with him one day to his “art storage locker” in the back of someone’s garage and bought some more. One day though I discovered Bill shooting up near the Israel Levin center so after that I gave him food rather than cash.

Sybil Grinnell was another Venetian who ended up becoming a permanent member of the crew. She was a lovely young blond dread-locked Brit who wandered up to the wall one day and asked if she could paint. I said yes! She later worked with me on “The Big Splash” and “Chagall Returns to Venice Beach” and became a dear and close friend whom I visited with a few years back on a rain soaked London day with her now grown up daughter. Sybil continues to paints community murals in England.

In the years between the painting of the 2 versions of the wall, both Rick and also Dora Bayrack, the elderly poet who wrote the poem for the wall past away. They are commemorated in the Chagall Returns version with a scroll with their names inscribed coming out of a seashell.

For the second mural, Chagall Returns to Venice Beach, I rented a small apartment from Venice artist Gilah Hirsh. I have many memories of her and that time as well.

As you can see I can go on and on – this is just a start!

SPARC: We can see how the mural has an incredibly rich history of the Venice community, not only in your depiction of the area, but also in the people who helped you who are now memorialized as part of the restored artwork. What are you looking forward to most during the restoration?

Christina: Painting, being back at the wall, meeting my new crew, seeing Judy and my friends at SPARC, breathing in the salty, beach air in Venice, eating tacos, enjoying a few shots of tequila……seeing the mural shine again!

SPARC: It has been a long process to initiate a new CityWide Mural Program for Los Angeles. What were your initial thoughts when you first heard about the restoration efforts and the selection of your mural in the first series of 9 murals being restored this year?

Christina: Of course I was thrilled when I received the notice! However this reminds me of another story, of a phone call I received back in the bitter winter of 1994. On that cold, dark evening I picked up the phone to hear a representative from the Israel Levin Center tell me they were very sorry that my mural, “Chagall Comes to Venice” would be sandblasted off the wall due to damage to the wall caused by the January earthquake, but they vowed they would get me back to repaint it. “Sure thing”, I thought to myself, “in a million years.” So I was amazed, pleased, surprised and delighted when in fact it came to a pass that the community pressured the center and the money was found to bring me back to redo the mural. The center gave us a beautifully prepared fresh new wall; I was able to reassemble a number of my original crew (including Bill, the homeless man, who contributed all the angels to the mural) and found new ones, such as Dougo (another homeless person), who wandered up to me in the early days of the repainting, and pointed out that Ocean Park Pier, a famous and beloved amusement park, had been located precisely at the very end of Ozone. He insisted that it should be in the mural. I asked him to make a sketch and bring it to me. On the next day, he shows up with a sketch of the Pier, which included the huge waves that crashed there that made it a popular surfing spot. Since I had not been happy with the original Ocean Front Walk section of the wall (people complained about the blue donkey – an image from Chagall which was interpreted by some as anti-Semitic), I was happy to have a chance to redesign that section. So I handed Dougo the wall; he painted the enormous blue crashing wave and the amusement pier, and I took elements from Chagall and sprinkled them around his image.

I have to say this is one place where promises are kept.

SPARC: What do you believe is the significance of this mural to its community?

Christina: Once upon a time, Venice had a large, retired Jewish community. There were two synagogues on the boardwalk and you would encounter any number of elderly Jewish retirees on the boardwalk, some bent over on their canes, enjoying the sunshine, and perhaps, ambling over to the Israel Levin Senior Center for a game of cards or a hot meal. There are fewer elderly Jewish folks on the boardwalk these days, but this mural honors their memory and also Jewish history by celebrating the great Jewish artist Marc Chagall. This appeals to the Jewish community but also to the Venice community and beyond due to the universality of Chagall’s imagery and the familiar boardwalk. This mural must have a deeper significance for the community since I was asked to paint a second time, and now a third!

SPARC: Could you tell us what significance this mural has to you?

Christina: This mural has enormous personal significance for me. Mostly it is a tribute to long and enduring friendship to Judy Baca, the Venice community, and my commitment to SPARC.

Christina: Hope! Hope that good things are protected and survive.

SPARC: Thank you Christina! We look forward to seeing you on the wall!