At the core of The Social & Public Art Resource Center’s (SPARC) mission and practice is an emphasis on education and engaging community youth in the production of public art. From the community cultural center it has called home at the Old Venice Police Station since 1977, SPARC has taken work to the blighted streets of skid row, to agricultural fields of Guadalupe, CA, to concrete flood control channels of Los Angeles, to Gorky Park, Moscow. SPARC was founded in 1976 by Chicana muralist and Distinguished UCLA Professor Judith F. Baca, filmmaker/director Donna Deitch, and artist/teacher Christina Schlesinger.

SPARC has been a catalyst for social change through the arts and a home for artistic innovation, creating public art as a vehicle to promote civic dialogue, foster cross-cultural understanding and address critical social issues. SPARC engaged 400 at risk youth in painting a ½-mile long mural (The Great Wall of Los Angeles) upon the concrete wall of the flood control channel – a scar where the river once ran, built parks in debris filled land, hung photographic tapestries in senior centers, built sculptures for children to play on in vacant lots and produced hundreds of the most iconic murals of Los Angeles. Today SPARC has contemporized the historic mural processes through the incorporation of technology in the UCLA@SPARC Digital/Mural Lab.

Karina Perez, a former student at Miguel Contreras Learning Complex and currently a UCLA and DREAM ACT student states that her ambition and dedication to the arts was a powerful force in bringing her to UCLA, even when deeply rooted social and political challenges threatened to impinge upon her right to an education. “When I first met Judy I said, “Judy, I want to be a social justice artist”; little did I know that a few months later I would receive my acceptance letter from UCLA and get myself enrolled in Professor Baca’s class at the UCLA@SPARC Lab.” For SPARC, a celebration of 35 years is not simply a retrospective of the accomplishments of public art in Los Angeles but rather, it is a chance to consider the future of public art and recognize the promising generation of youth artists who will keep the voice of art and the voice of community alive.

Special tours inside the LA River led by Judy Baca, SPARC Co-Founder/Artistic Director, will be
available of “The Great Wall of Los Angeles”, the longest mural in the world & SPARC’s signature work.

35th Celebration Party for all, where The Siqueiros Award, The Judy Baca Social Justice Award, and
The SPARC Founders’ Award will be presented along with a retrospective exhibition, jazz & blues
legend Barbara Morrison, dancing, food/drink marketplace, mural making, and photo booth. The
event will be held at SPARC’s home, the Old Venice Police Station. 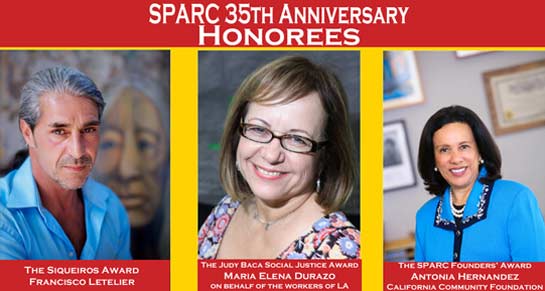