The Conservation of “Chagall Returns to Venice Beach” by Christina Schlesinger

Chagall Returns to Venice Beach prior to Conservation.

Chagall Returns to Venice Beach is a tribute to Venice’s retired Jewish Community. The inclusion of imagery by Marc Chagall, a celebrated Jewish artist, appeals to the both the Jewish and Venice communities. Some of the individuals who assisted in painting the original mural are now members who attend the meetings at the Senior Center, which has created a strong sense of ownership over the mural.  The names on the ribbon by the shell, Dora Bayrack and Rick Barnett, are of the painters who passed away while the piece was still in progress and the Rabbi was given Rick’s likeness to honor him. Fey, one of the seniors at the center, painted her late parents entering the synagogue in 1996. Dougo, a homeless resident of the boardwalk, painted the ocean scene on the beach facing wall. His contribution memorialized the previously burnt down Ocean Front Pier, a gathering place that had characterized Venice Beach in the seventies.

Our assessments of the mural found that most of the damages sustained were do to efflorescence on the beach facing wall and top half of the whole piece. There is a considerable amount of efflorescence over the phthalo greens and turquoises. Sandy earth tones also exhibit mild efflorescence. Some delamination was found by water sources, windows, ledges, and cracks in the wall. The binder was weakened thereby muting the previously vibrant Ultramarine and Phthalo Blue skies. There were few areas which sustained small graffiti vandalism. The lower ledge by the entrance ramp had a thick layer of wax where candles had been allowed to pool and drip wax down the side of the mural. Four areas exhibited damage to both the paint and wall do to vehicular impact. There were also attempts to cover graffiti with a light purple paint that did not match the original piece.

Step 1a: MuralShield preservation coating will be applied to the acrylic paint to secure pigmentation and consolidate degraded binders. This will achieve an initial color restoration on regions that have oxidized or accumulated efflorescence.

This requires a few hours to apply. All building and architectural elements near the mural will be masked and protected from overspray. SPARC will administer a moisture assessment of the MURAL.

Step 1b:  Reattachment  of delaminated paint

This procedure binds the acrylic MURAL surface to the wall section it has been detached from. This procedure will be applied by hand.

SPARC will take a high-resolution digital photograph of the final mural restoration upon completion.

This conservation began with documenting the state of the mural. We ran moisture tests, consolidation tests, and binder condition tests. We found that the wall surface was still in very good condition. We then applied a fog coat of MuralShield to consolidate the deteriorated binder and reinforce the pigment. This enhanced the mural’s appearance and recovered pigments that were obscured by efflorescence. We found very little to no moisture leaching through the areas tested post consolidation. Where we found areas of delamination, localized to cracks through the wall and water sources, we removed the pooled sand and reattached the paint to the wall’s surface with both MuralShield and 207 acrylic gel medium. We determined that the mural would not benefit from graffiti removal because the negligible amount of tags and third party conservation attempts avoided all of the composition’s major focal points. The largest areas of third party restoration attempts were in the rightmost corner of the mural and bordering one of the larger foreground objects.

Before the Original Artist was scheduled to arrive, SPARC technicians began in-painting on the background elements, foreground objects, and clothing of the figures. We then coordinated with the Original Artist of Record to have her administer the remaining in-painting repairs with our SPARC technicians. The artist was onsite for two weeks and worked from archival imagery to recover the likenesses of the mural. She focused her attentions on the portraits and focal points of the mural, utilizing full pigment heavy body golden acrylic paints. Care was taken to eliminate any water use in the painting system. All paints used were rated at the highest lightfastness and determined in consultation with Golden Acrylic conservation technicians and material scientists.

Upon the completion of the in-painting repairs and prior to the application of protective coatings, the mural was vandalized, a deliberate act of anti-semitism. God’s hands, the tablets, Moses, the Torah and the man holding it were all sprayed over with a dark brown aerosol paint. We removed most of the paint with a water diluted solvent, but unfortunately lost some areas of newly painted surface. The team successfully repainted the lost areas and immediately applied our MuralShield and acrylic-modified sacrificial wax  coatings to the mural. This system will protect the mural from future environmental damage, including UV light, pollutants, and further vandalism. Outstanding preservation procedures include installation of the finalized didactics and the final MuralShield coating and acrylic-modified sacrificial wax coatings of the finalized didactics.

SPARC technicians took high-resolution photographs of the completed mural in order to digitally restore the rest of the piece in the Cesar Chavez Digital Mural Lab. The fully restored digital mural will be printed and installed within the renovated Jewish Federation Building. 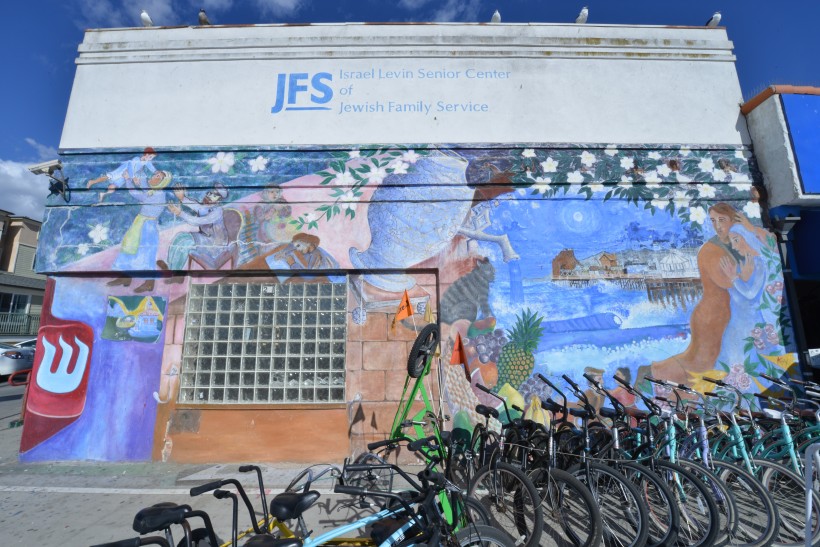 The Ocean Front Walk facing wall prior to conservation. 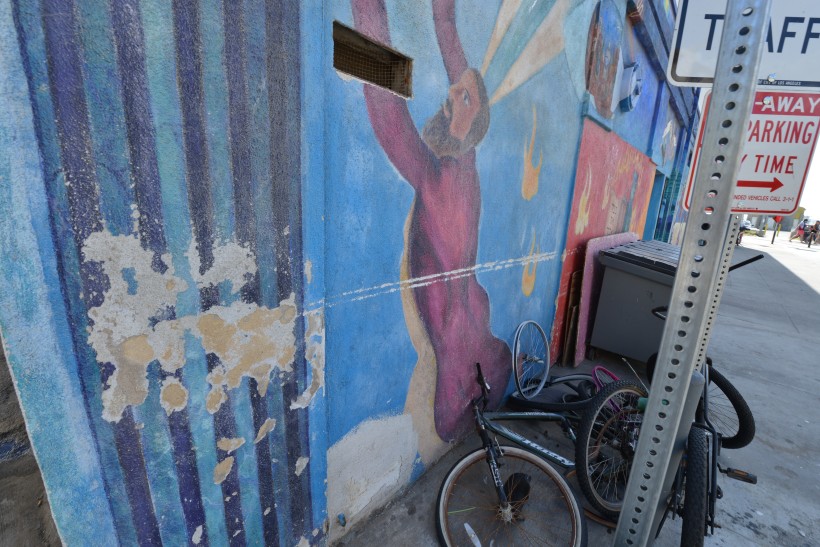 Area of the Wall that was damaged by impact. 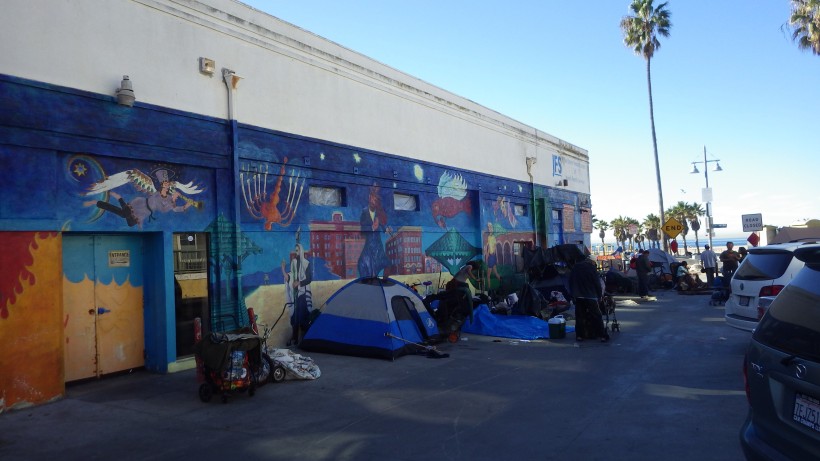 The homeless Venice Community gathers by the wall to make room for the weekly cleaning of Ocean Front Walk. 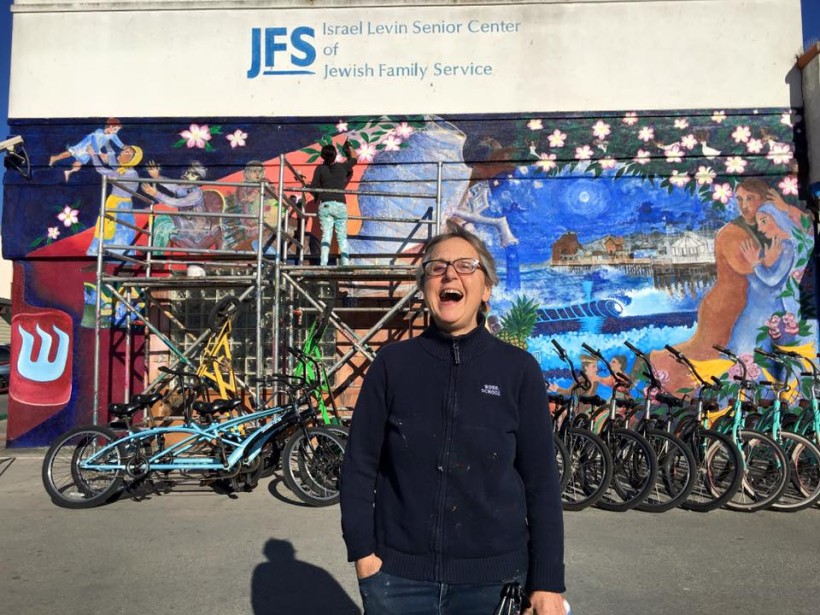 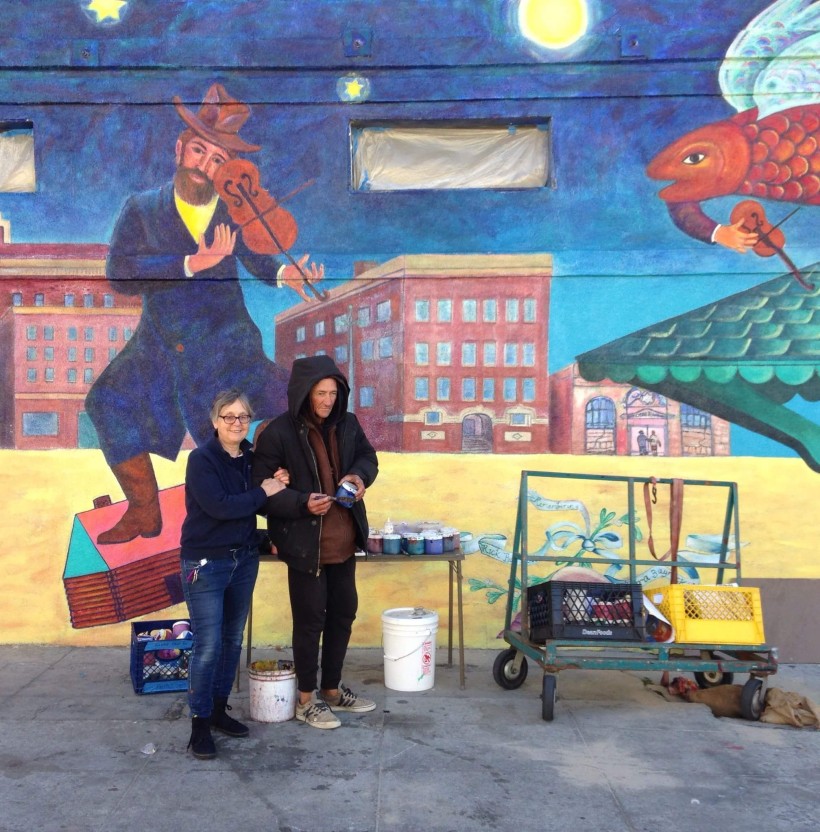 Christina Schlesinger posing with Dougo, the original artist that painted the ocean scene vignette on the beach facing wall. 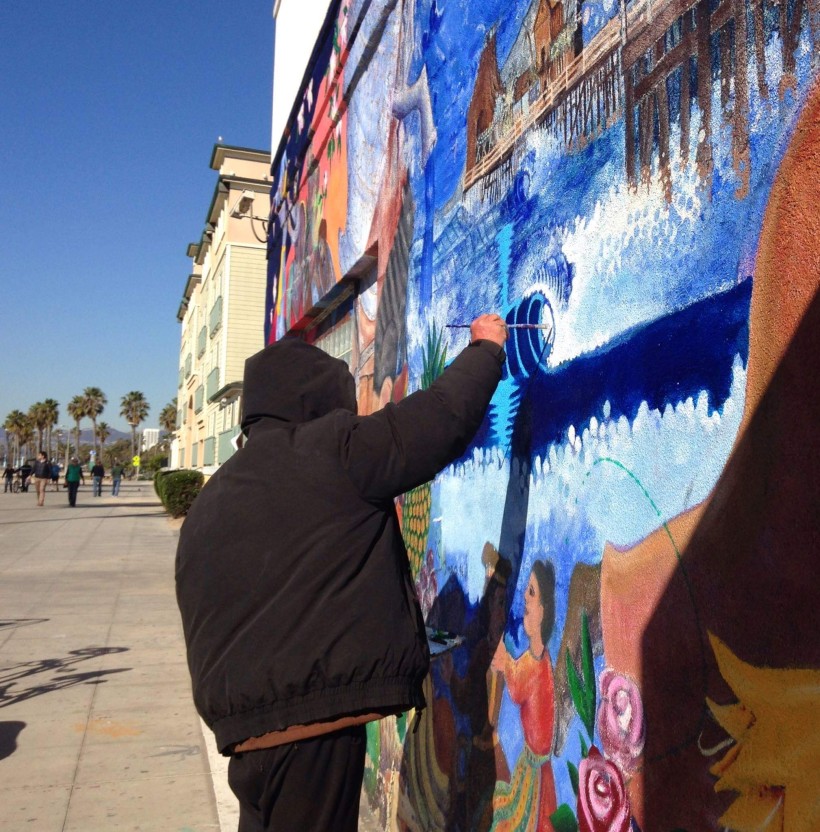 Dougo volunteering to bring back his original piece of the mural. 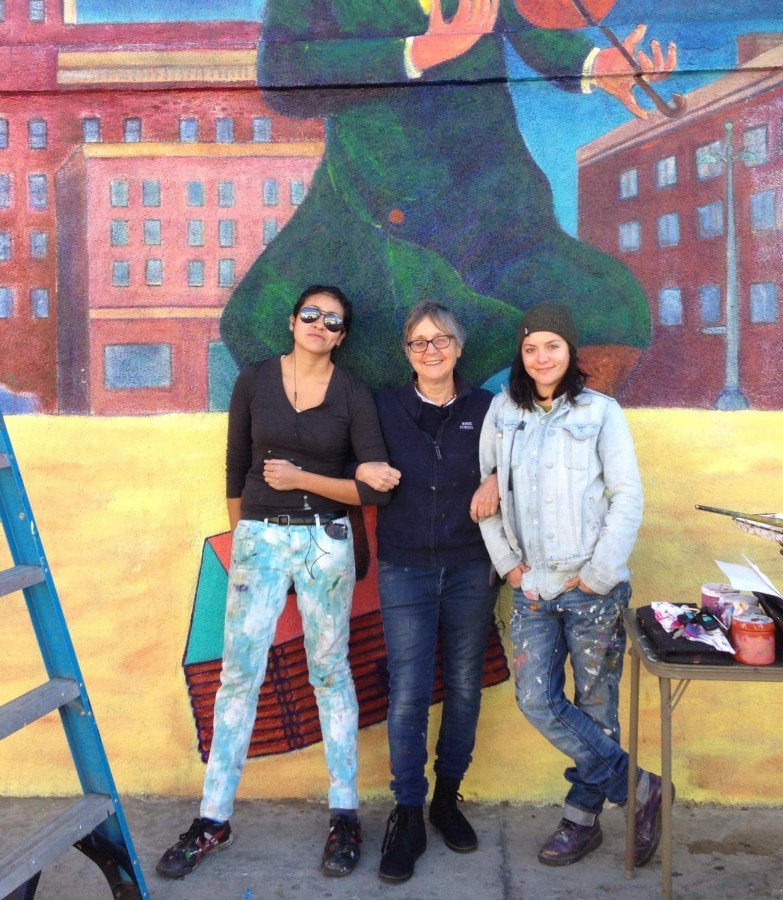