We’ll Bring The Streets to You

This week, we are featuring When Windows Become Canvases: Street Art for Social Justice.

Charles “Boko” Freeman’s 1993 mural, “Return to the Light”, depicts prevalent social ills, including the senseless killing of young people and the issue of widespread homelessness. The shaman in the center of the mural represents a healthy state of wholeness while the elderly symbolize rich experience and wisdom. The spirits of Pancho Villa and Zapata are there to signify strength and courage, and Cesar Chavez represents vision being focused. The mural’s title refers to the role of spirituality in finding solutions.

The mural is located on an exterior wall of the Carlota Park Apartments. Originally affordable retirement living, the apartments have now opened up as affordable housing for other members of the predominantly latino community. As we continue to see the racially driven housing crisis worsen, “Return to the Light” serves as a powerful reminder of the injustices that are still disproportionately affecting black and brown communities.

Freeman worked with the Latino community in Los Angeles as he painted “Return to the Light” along the Pasadena Freeway. He invited input from the neighborhood and worked with youth apprentices from the community. During the 2015 restoration, he was supported by muralist and collaborator, Noni Olabisi.

Freeman dedicated his life force to the betterment and monumentality of our communities. He was a community worker and organizer with the Black Panther Party in Houston and Los Angeles, and a key figure in securing groceries for the Free Food Program.

Astounding numbers of peaceful protesters across America are demanding accountability from law enforcement for the continuous brutalization and murders of Black, Brown and Indigenos civilians, namely starting after the consecutive and mass-publicized murders of George Floyd, Breonna Taylor, and Ahmaud Arbery.

Angelenos have both heard and seen the aftermath of 1992 protests in response to Rodney King’s beating, so it comes to no surprise that LA businesses boarded up their store-fronts in response to looting that has occurred aside from the peaceful protests, which began early this June.

These plywood boards, which otherwise appear as symbols of business-owners fearfully defending their property, have become blank canvases bearing different messages. A dialogue has emerged from them, between businesses owners, artists, and protestors displaying their support for the demands of the Black Lives Matter movement — to end police violence and dismantle systemic racism in the US.

For this week’s feature of We’ll Bring the Streets to You, we’ve highlighted the range of protest art that has surfaced on these plywood “murals” around our HQ in Venice, and beyond:

Noni Olabisi’s mural, To Protect and Serve, details the history of police brutality and the KKK in Los Angeles that led to the formation of the Black Panther Party for Self Defense. The mural depicts key figures within the Black Panther Party and their work to fight racial injustice and implement critical community programs, including Free Breakfast for School Children, clothing drives, and testing for sickle cell anemia. “To Protect and Serve” was restored by SPARC and Noni Olabisi in 2015, and it continues to be a vibrant reminder of resilience, resistance, and the power of collective action on Jefferson Boulevard in LA.

Women Do Get Weary But They Don’t Give Up was created by Alice Patrick, the first African-American woman muralist in Los Angeles, as part of the SPARC Neighborhood Pride Mural Program, which employed 99 artists to produce 105 murals across the City of Los Angeles between 1988 and 2003.

Seated on benches in front are educator Dr. Mary Mcleod Bethune (founder of NCNW in 1935) and current NCNW president Dr. Dorothy Height, plus several anonymous older black women, all of their faces expressing pride and strength. Standing behind them, and benefitting from their courage and perseverance, are entertainer Josephine Baker, TV personality Oprah Winfrey, jazz vocalist Sarah Vaughan, and Olympic runner Florence Griffith-Joyner.

The mural is located on the National Council of Negro Women building. It was fully restored by SPARC’s Mural Rescue Program in August 2012 with an anti-graffiti coating, so it can remain for another generation to come.

From Civil rights icon Angela Davis’ Freedom is a Constant Struggle, “Black feminism emerged as a theoretical and practical effort demonstrating that race, gender, and class are inseparable in the social worlds we inhabit.” As we’re seeing black communities disproportionately affected by COVID-19 medically, in prisons, and even in the privacy of their homes and neighborhoods — with the recent murders of Ahmaud Arbery, Breonna Taylor, and George Floyd — this mural represents how the fight against racism will brave on.

Gente del Maíz was created in the Digital Mural Lab at SPARC during a 20-week collaboration with high school students from Miguel Contreras Learning Complex (MCLC) and undergraduate students from UCLA. Emerging from the experiences of students and their parents, this piece commemorates the legacy and work of labor organizer Miguel Contreras (September 1952 – May 2005), and promotes community ownership, honoring past struggles, and empowering youth to plant the seeds of future dreams into the local soil.

Today, essential workers from immigrant communities are keeping our nation fed and protected during this public health crisis. Join the movement to protect worker rights and call for the automatic renewal of DACA and TPS. Every worker and every immigrant is essential in this nation and our collective response to COVID-19 must include protecting workers regardless of legal status. Sign the petition by CHIRLA at yosoycalifornia.chirla.org.

Love is For Everyone was created by Mary-Linn Hughes and Reginald Zachary for the Minority AIDS Project Building. The mural acknowledges and unites communities of Color affected by the AIDS crisis in the 90s. It encourages love as a vehicle for destigmatizing and creating solidarity in times of fear and uncertainty, much like the times we’re currently facing. The mural is currently being restored by SPARC’s Mural Rescue Program. Our program is known for restoring, preserving, and conserving murals that are cultural monuments, deemed “historically significant” by the Department of Cultural Affairs (DCA) for voicing the needs of underserved and minority communities.

Over thirty years ago the world struggled to deal with an emerging epidemic caused by a virus. Fear and hysteria led to misinformation and stigmatizing. Vulnerable communities faced inadequate healthcare and resources. The government was slow to act and the consequences were tragic.

In a moment filled with discrimination and scapegoating, the best of humanity stepped forward with the founding of the Minority AIDS Project to provide hope, compassionate care, and vital services to African American and Latinx women and men living with HIV/AIDS in Central and South Central Los Angeles. Our mural, Love Is For Everyone, highlights the critical resources that the Minority AIDS Project has provided for many decades.

Designing and painting the mural involved many people working side by side including MAP staff and clients, SPARC leaders and assistants, and volunteers from all sectors of the community, all contributing endless hours of their time. Together we created a mural celebrating life and lovingly remembering many who have died from AIDS.

Yes, there are some parallels between the early years of the HIV epidemic and our current crisis but there are also many differences. Today we can take inspiration from the work of the Minority AIDS Project providing essential assistance to individuals experiencing multiple vulnerabilities. Love is For Everyone reminds us that we are all in this together, and that when we keep our hearts open and reach for unity, we can address the challenges of our time.

Calle de la Eternidad by Johanna Poethig represents symbols and artifacts from pre-Columbian America, wrapped in a poem by Octavio Paz and elevated by ceremonial gold hands. The text reads, “My steps along this street resound in another street. In which I hear my steps passing along this street. In which only the mist is real.” Once located in DTLA, it represents slowing down in time and place in order to activate our past. This mural was digitally restored by the artist at SPARC’s Digital Mural Lab, and is looking for a new home! If you know of a site that the mural speaks to, let us know.

I’ve painted three murals for SPARC over the decades. Calle de la Eternidad (Street of Eternity) is about the illusions of time and the way we exist in more than one place at a time. Spirit of the Sage is an homage to the first inhabitants of this land, and their deep reverence for the environment and their fight for our planet. Stamps of Victory was a celebration of global exchange and communication.

Muralists are faced with a new challenge in this time of pandemic and social distancing. We’ve never experienced this before and our responsibility is to the safety of our first responders, to the essential workers who keep us fed and take care of our needs as a community and population and the most vulnerable among us. How do we make art? How are we useful? How do we work for the public and in public space in this time of isolation? I take heart in that muralism is more than a painting on the wall. It is a philosophy of art and artmaking for a public that investigates histories, context, culture, politics, environment, and the architecture of our societies, local and global. It seeks to inform, to inspire, and to illuminate. Borders mean nothing to the terrestrial, to climate change and all of its messengers. As muralists, or at least personally myself as a muralist, I feel I need to work through the restraints of quarantine and find new ways to activate and advocate for our community, for our survival, for the earth, for other beings among us. That’s what I’m thinking about right now and searching for ways to use the technology that is available to us, and find new ways to put art out there that sustains people through this next era of our time on earth.

The Great Wall of Los Angeles is a half-mile long (2,754 ft) mural conceived by SPARC’s artistic director and founder Judy Baca. Running along the Tujunga Flood Control Channel in the San Fernando Valley, the site has a walking trail, allowing visitors to experience the history of inter-racial discord and harmony in Los Angeles, from prehistoric times until the 1950s. We are currently selling walking tour guides to help support our continuation of The Great Wall of Los Angeles beyond the 1950s, as well as to create a Green Bridge that reconnects the two sides of the channel. 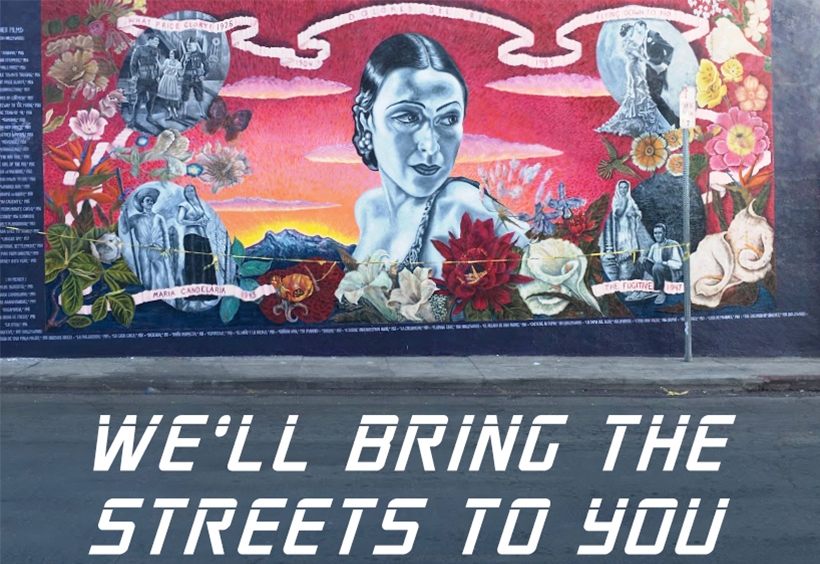 Art and democracy have always been a powerful combination in the public sphere. Murals occupy the space and walls as “sites of public memory” to empower citizens to unite, as well as to foster imagination and cultivate creativity.

In the time of coronavirus, SPARC will be featuring legacy murals in Los Angeles that illuminate local histories or address critical social issues that are becoming even more poignant right now. In this virtual tour series, technology makes Los Angeles murals and works of art accessible to a wider community.

If you are able to support our creative community, we ask that you do so by staying connected and engaged. You are vital in sustaining our mission during this uncertain time. 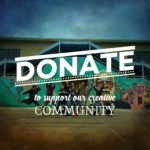 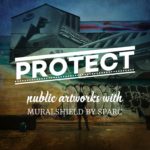 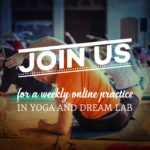 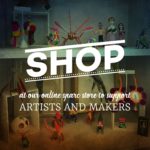