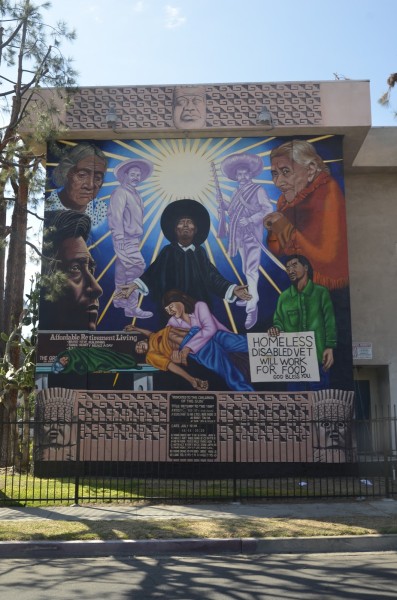 “Return to the Light” by Charles “Boko” Freeman

The conservation of Charles “Boko” Freeman’s mural, “Return to the Light” is now complete! SPARC’s CityWide Mural Team along with Boko spent several weeks meticulously repairing the mural from vandalism and delamination. Our conservation technicians removed a significant amount of graffiti, most likely vandalized with a pressurized fire extinguisher. Despite appearing faded, once the binder was consolidated with MuralShield, a majority of the portraits became immediately vibrant. Now that the conservation is complete, this Highland Park gem will remain vibrant for many more decades. The mural can now be viewed off of the 110 freeway towards Pasadena. The mural is located on the south facing wall of the Carlota Park Apartments, 227 E. Ave 41, Los Angeles, CA 90031. 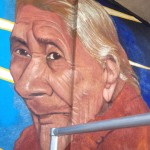 Detail of “Return to the Light”

The Carlota Park Apartments has historically been a home for low income seniors. Today, the apartments continue to serve seniors and families with marginal incomes. The mural design features very prominent Mexican and Chicano historical figures such as Cesar Chavez, Pancho Villa and Emiliano Zapata. Additionally, the top of the building is accentuated by an Olmec head. “The subject of the mural is return to the light,” says Boko Freeman, “which itself is a highly spiritual subject because we all are here for a limited time; we have to do what it is we have to do here, which it mainly to learn and to grow, to evolve.” The mural interrogates two prevalent social issues affecting the local community: the senseless killing of young people, and homelessness. The shaman in the center represents wholeness and reflection in the face of injustice. Cesar Chavez represents vision, while the portraits of the elderly residents of Carlota Park are symbols of wisdom and experience. The spirits of Pancho Villa and Zapata signify strength and courage. The mural’s title refers to the role of the spiritual in finding solutions to injustice. 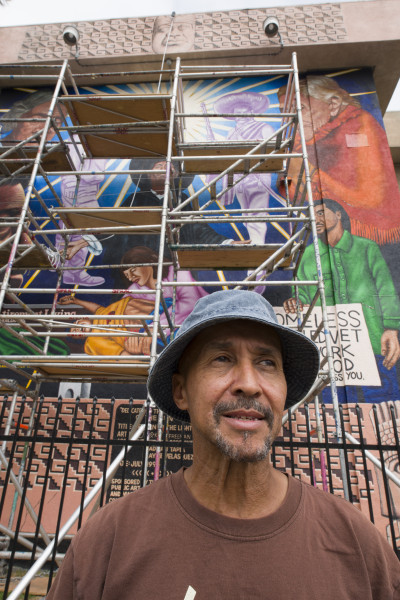 Charles “Boko” Freeman in front of his mural