“Love is for Everyone” by Mary-Linn Hughes and Reginald Zachary was created under SPARC’s Neighborhood Pride Program in 1991. The mural is located on 5149 W. Jefferson Blvd, in Los Angeles. This is the first mural in Los Angeles to incorporate the subject of Acquired Immune Deficiency Syndrome (AIDS). The goal of this mural is to portray the diversity of individuals affected by AIDS. The imagery includes both figures and silhouettes embracing, including a mother and child, a young girl, two men hugging and others talking, embracing and holding hands. The composition is balanced; the two men embracing draw our eye to the center of the mural, while the surrounding silhouetted figures offer a strong contrast in representation. Five small reliefs in the middle of the mural depict images of the world, a phone and phone number, a heart, a woman’s face, and two hands reaching to each other. The figures in the mural are on a black and white scale, while others are in silhouettes. The background is colorful and geometric; each colorful shape has a name or phrase on it. This mural was painted on the wall of the Minority AIDS Project in Los Angeles, which has been serving Black and Latino communities since 1985 by supporting AIDS and HIV positive individuals. The primary artist, Mary-Linn Hughes, was funded by the California Arts Council for several years to serve as the artist-in-residence for an AIDS support organization in Orange County. She then asked Reginald Zachary to be the co-leader on this mural.

We began with documenting and setting up our water reclamation system. We tested the correct concentration of solvents to achieve a controlled delamination of the latex-based gray paint by conducting timed interval applications. We documented 5, 10, and 15 minutes intervals utilizing 6 different concentrations of solvent.

Our high concentration Heritage solution at 5 minutes followed by agitation produced the best results. We then modified the solution with a gel to keep the latex paint “wet” during our saturation testing. We administered each test with a low-pressure wash at 100ºC to accelerate the delamination. We concluded that utilizing Heritage solution in gel formed gave us the most control during water-delamination over other solvents.

Our first day of applying the solvent mixture was a success. We achieved almost 75% removal of the grey latex paint, although, I was surprised to find the yellow color beneath to be slightly off from the colors in archival photographs. A closer inspection found that the yellow color was in fact another layer of latex-based paint that had been used to cover up even older vandalism. Beneath that was a urethane coating. The image below shows the back of the paint film with remnants of the urethane coating.

We utilized combined a mixture of biodegradable surfactant with a diluted concentration of Heritage to remove the urethane coating. We ran tests at 80ºC–90ºC–100ºC at low and high pressure. The optimal methodology was a low pressure water delamination at 85ºC with the surfactant solution applied at intervals of 20 minutes with mild agitation before and during water delamination.

The process was highly successful, with only minimal loss to the most degraded cadmium yellow border above. The tonal difference is dramatic. You can see the striking difference most prominently along the yellow border. This is almost two tonal values of difference.

We ended the day with an objectives list for day three: 1. Complete the removal of grey and yellow foreign paint matter, 2. administer the controlled water-delamination method on the above portion of the mural, and 3. Begin the MuralShield consolidation process with a light fog coat.

It took three days of intense conservation. By the afternoon of the third day, all foreign paint matter and degraded urethane coatings were successfully removed. We allowed the mural to cure before applying a fog coat of MuralShield preservation solution.

By July 11th, at 4pm that afternoon, the first phase of the mural conservation was complete. Mary-Linn Hughes and Reginald Zachary were then brought in to administer the in-painting repairs.

The in-painting repairs took two weeks to complete. Mary-Linn Hughes and Reginald Zachary administered the repairs with SPARC technicians. They completed the repairs in a timely manner. All in-painting repairs were meticulously documented. All names honoring individuals affected by HIV or AIDS were restored in the same location. Obscured or deteriorated names were recovered from digitally enhanced archival photographs. 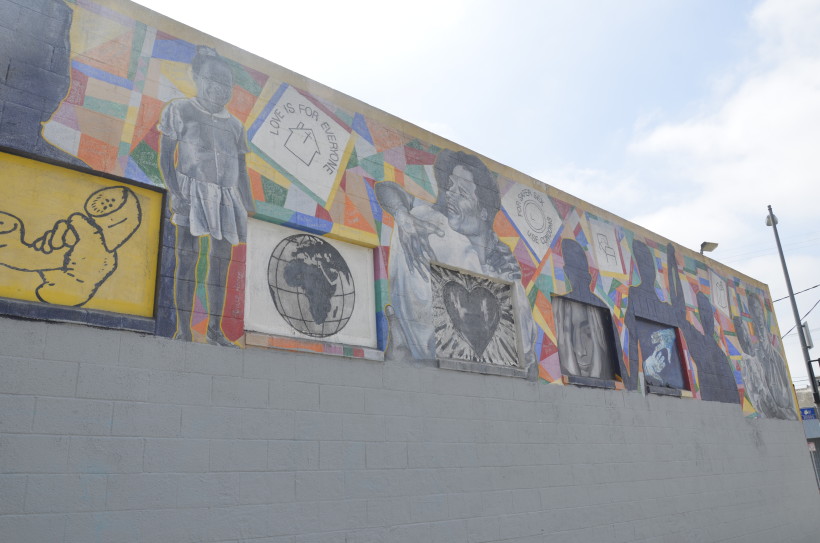 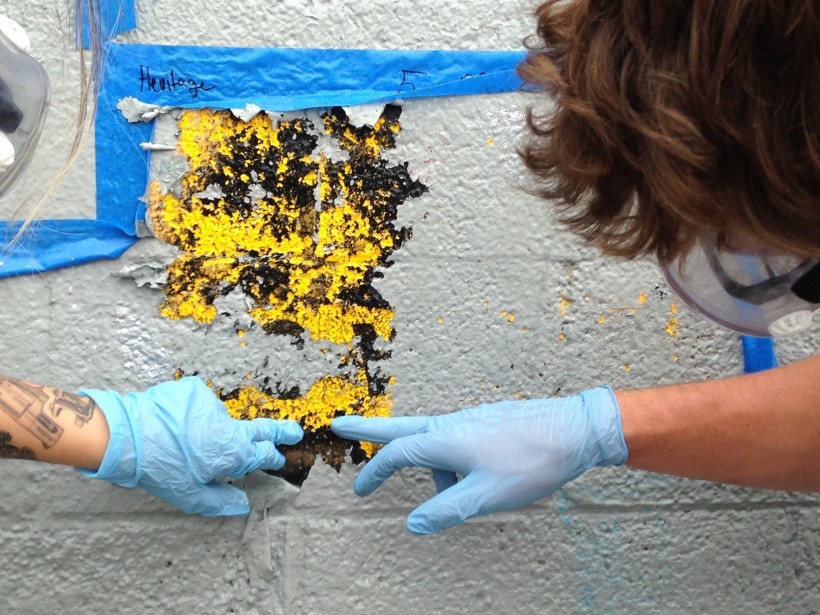 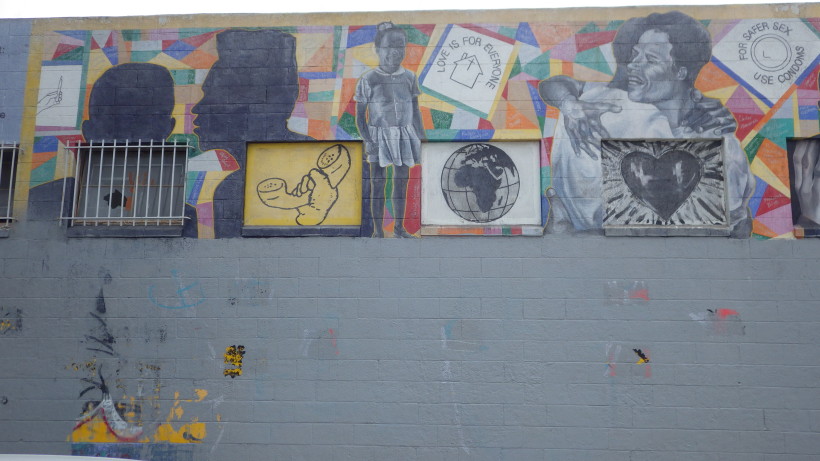 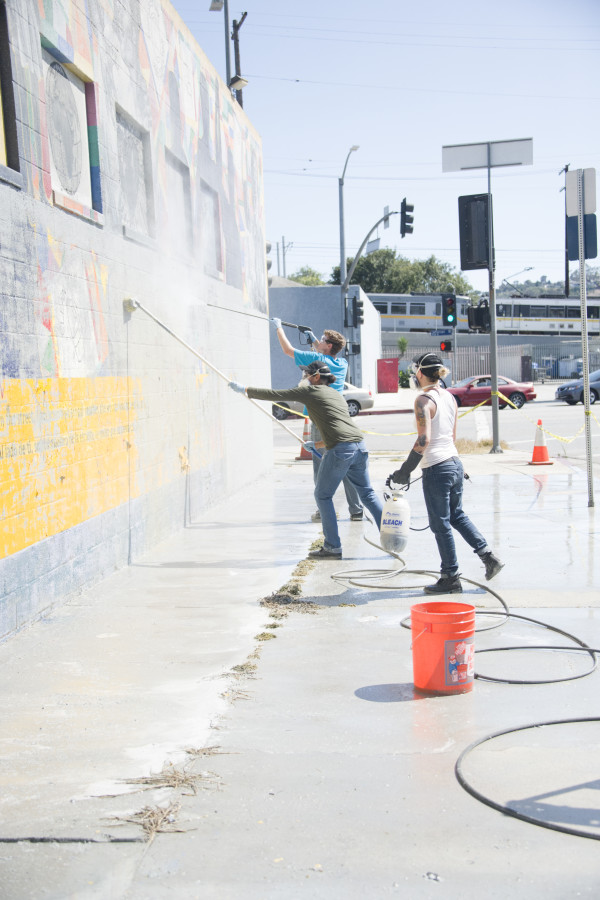 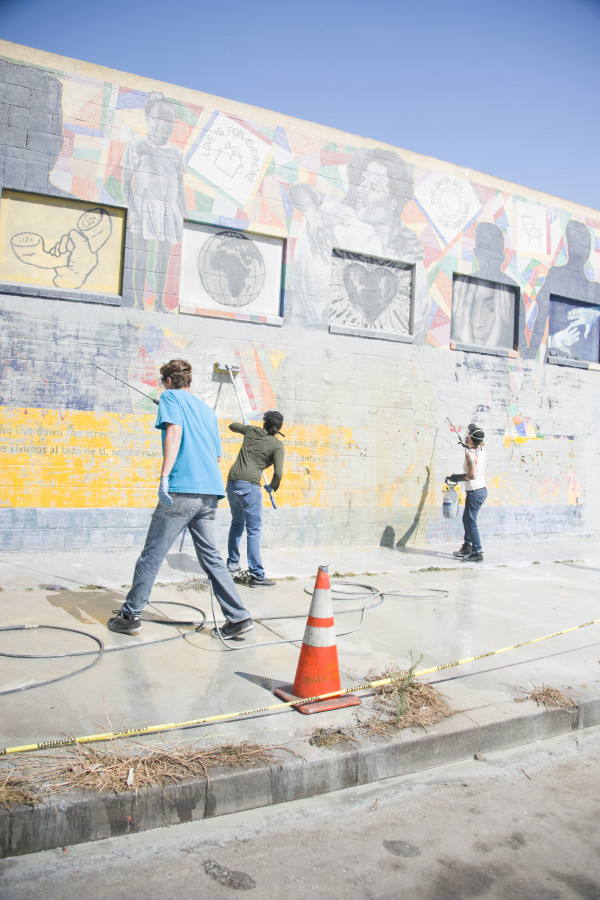 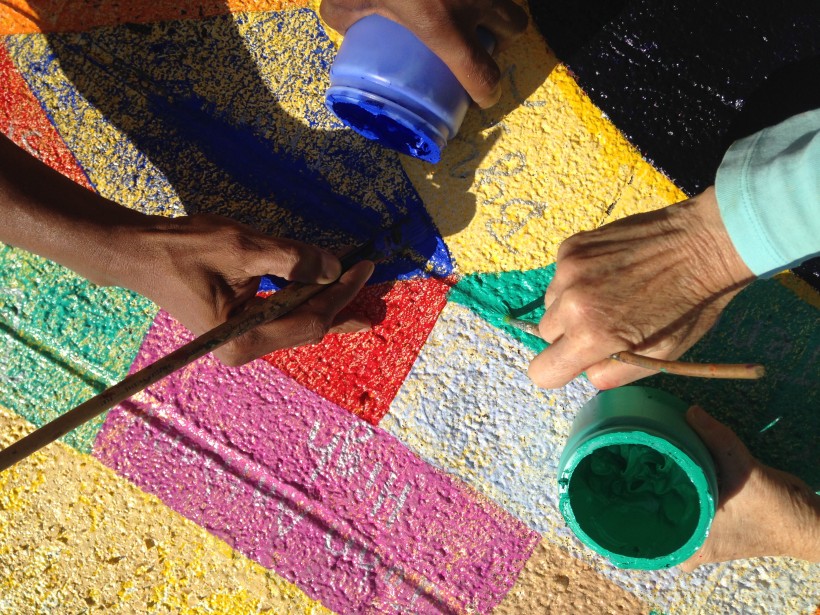 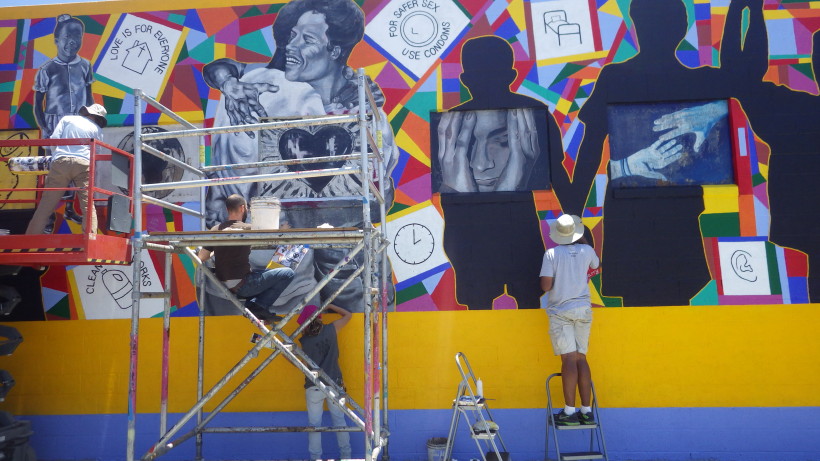 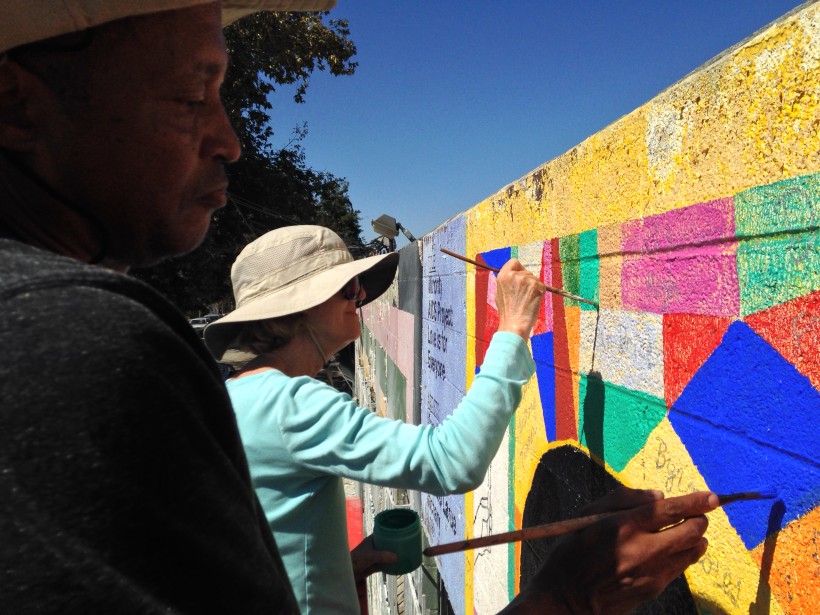 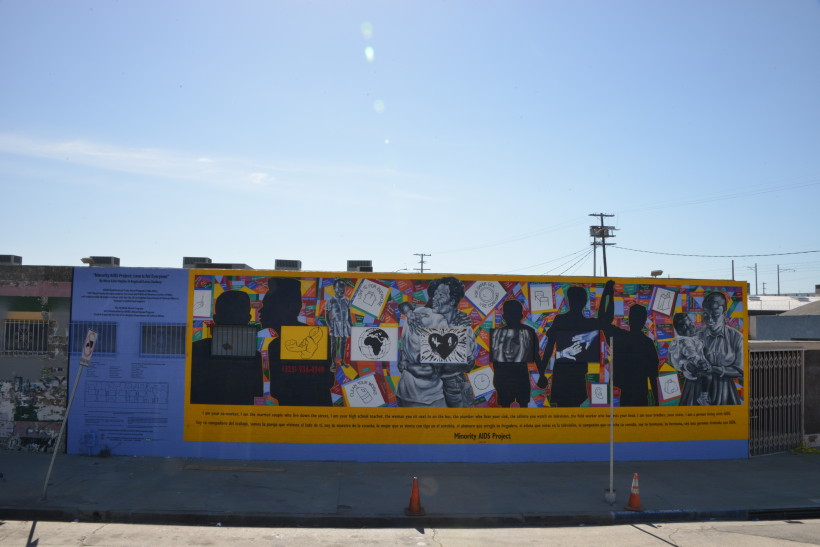 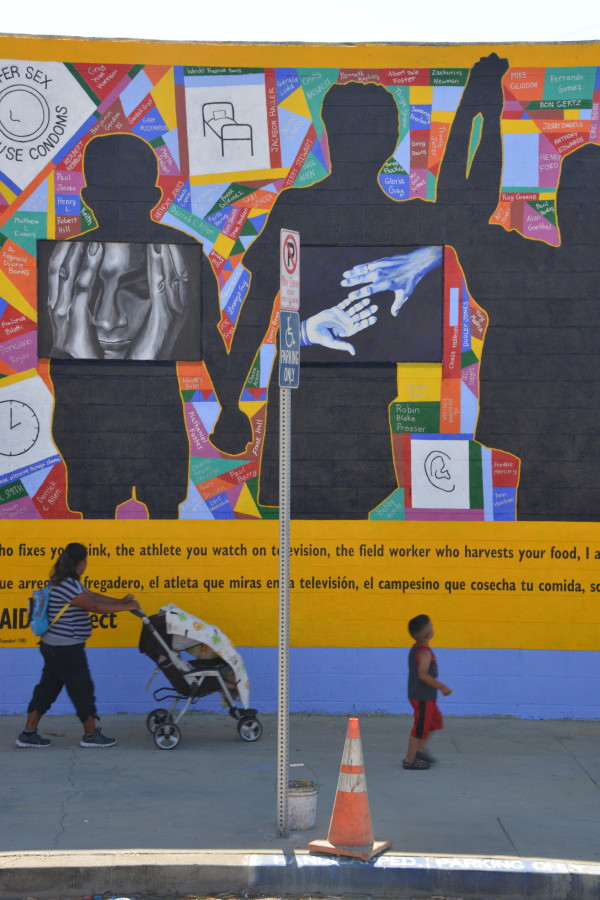 Mary Linn Hughes, on conserving “Love is for Everyone”…

“Twenty-five years ago I was approached by SPARC about partnering with an HIV/AIDS services organization to create a mural.  I was working in the HIV/AIDS community as an artist-in-residence and had started “Open Portraits” a project offering community, photo equipment and training for people living with HIV and their family members to make images about their lives.  If I was going to create a mural I wanted a collaborator and approached Reginald Zachary, an artist I met when we were both volunteering at an AIDS organization. Together we went looking for and found the perfect home for a mural at the Minority AIDS project.

Months of meetings and photo sessions with MAP staff and clients led to a design followed by several more months of prepping and painting.  It was exhilarating to watch the wall come to life.   Invaluable help came from friends, family members, SPARC painters and MAP volunteers.  After all the painting was done, with silver markers in hand, we added the names of over 150 men, women and young people lost to the epidemic.  Several of the names were people I had loved.

Fast-forward to 2015 and an unexpected phone call from SPARC with the good news that our mural, “Love is for Everyone” had been selected for restoration. Twenty-five years of sun, rain and graffiti had taken a toll and just before the restoration was to begin the city mistakenly covered up a significant part of the mural with gray paint.  Amazingly the mural rescue team was able to remove much of the unwanted paint and we began the satisfying process of bringing the wall back to its original glory.  The painting team that SPARC put together, Carlos Rogel, Myisha Luis Arellanus, Ariel Luna Anais, and Ian Robertson-Salt, was amazing and I loved every minute working with them.   At the end of every day it was incredibly satisfying to step back and notice the progress made that day.  The work went quickly and soon I was back with the silver markers restoring the names and adding new ones as well.

On the very last day of work, after everything was cleaned up, the exhausted crew gathered in a group and stared at the wall which was bathed in golden light.  I was immensely grateful for being given the opportunity to reconnect with MAP and SPARC and to work side by side with my good friend Reggie.  I’m not sure I can communicate with words the satisfaction of revisiting a project after such a long span of time and the joy of seeing it come back to life.  As we all stood there, tired but happy, a woman came walking around the corner and stopped to gaze at the mural.  She smiled and said “Nice work. My son’s father’s name is on the mural. I’m glad it’s still there. My son is in Europe right now but I’ve been telling him about the changes in the mural and I’m sending him a picture so he can see it.”  She pointed out his name to me. It was a sweet and touching encounter and felt like just the right way to end the restoration.”

Click Here to return to the Conservation Report Main Page