< Go Back To The Main Page of The World Wall
The World Wall is message of hope, a wake up call to action for those who cherish the unbridled fury of the human spirit and the hope of all people for a future without fear.

The World Wall is art that you enter, contemplate with a quiet ferocity, are affected by, and ultimately blown back into reality with a mission on your mind. The Wall reminds us that if we are not outraged by what is being done to us, we are not paying attention. 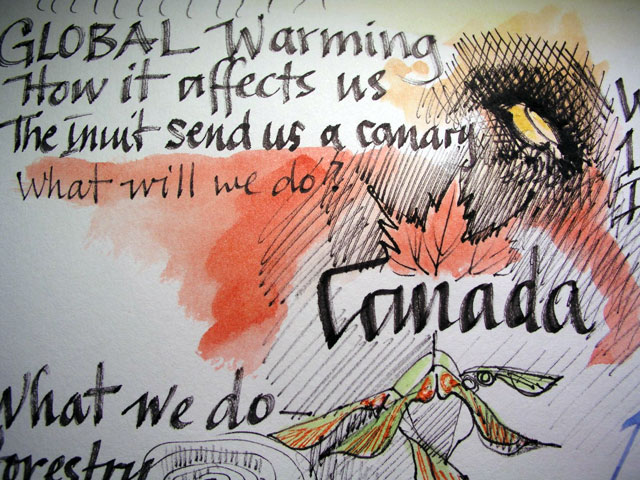 The World Wall is a metaphor for the human evolution in seeing and acting that is required to transcend linear thinking and head off the downward spiral into cultural collapse. Like our future, the World Wall is not possible without a deep collaboration between worldviews. The Wall itself is a contradiction—how do we maintain individual artistic expression while blending the creative input of several artists so that the result is a harmonious whole? The World Wall embraces this dilemma; the balancing of spirits, the melding of artistic expression. It is a reconciliation of fears between many factions usually opposed, now collaborating. It is not complete as a work of art without its separate components in place, each piece linked and interdependent upon the rest. But once complete, it trumps the whole because the Wall is synergistic—that is, the whole transcends the sum of the parts like a symphony rising out of the efforts of individual instruments. 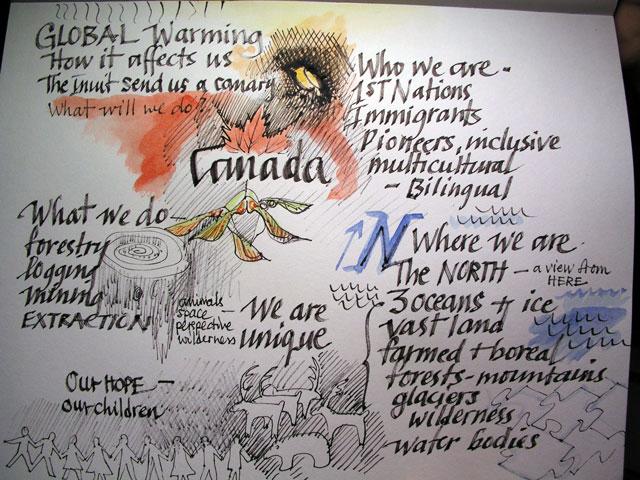 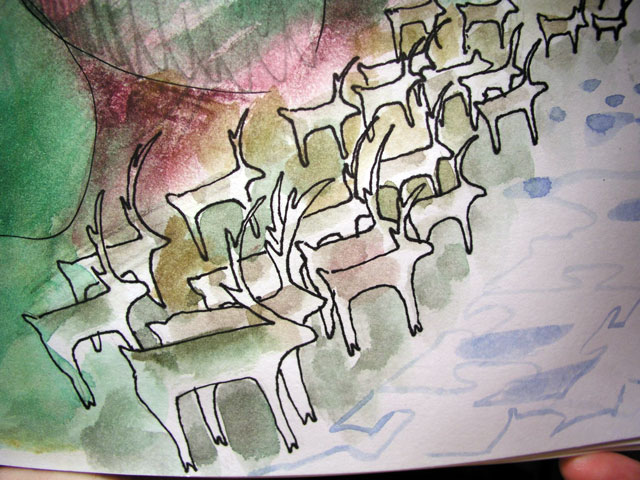 The formal nature of the world’s dilemma is the danger of a linear mode of thought as a guide to action in systems which are inherently circular. The circular installation is a break with linear thinking, with the two dimensional expression of painted canvasses. The World Wall pushes us away from the linear structure of single purposeful action into the circularity we see in organic and social systems which blur the distinction between cause and effect. It is not meditative, it is transformative. It suggests to us that our simple linear notions of causality, which lead us to think of actors, the objects upon which they act, and the transformation of these, be replaced by a circular notion of cause and effect.
< Go Back To The Main Page on The World Wall

Canada is an immense raw canvas of mostly untamed landscape, vast geographic remoteness, tenuously connected but resolute communities, and a still flourishing indigenous vitality embedded in its core. These characteristics render a remarkable uniqueness to the Canadian consciousness, and a pervading thematic underpinning for the World Wall. 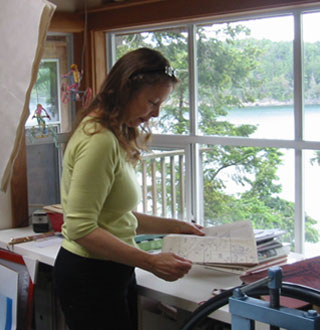 West coast aboriginal tribes have long conceptualized the world as being ‘sharp as a knife’. That edge is the frontier where human settlement and human thought, everything we know as civilization, confronts wildness. That edge is also the place where, in Canada at least, two ways of being in the world, the indigenous and non-indigenous, still co-exist. These two ways of being yield two kinds of human condition, each with its own set of circumstances. They collide at the knife’s edge, usually with disastrous, rarely with brilliant, results. The history of this collision tells us that the world is impoverished each time an indigenous culture falters. Yet these different ways of thought are, as potential, within everyone. We can reach into ourselves and find two versions of life, two ways of speaking and knowing. This is the gift of collaboration, but it is also the imperative of our survival as humanity.

Knowing where that edge is, and restraining its broad sweep across the landscape is critical to our future. In many areas of the planet this boundary has been obliterated; in a few it remains assaulted but intact—Canada is one of those. Canada has the talent and capacity to safeguard this frontier, to keep the world sharp. And this, if sustained, will be one of Canada’s greatest legacies for the future. How to instill in the World Wall imagery of Canada that is both novel and iconic while remaining unclichéd and critically relevant is perhaps the most daunting challenge facing the Canadian project. 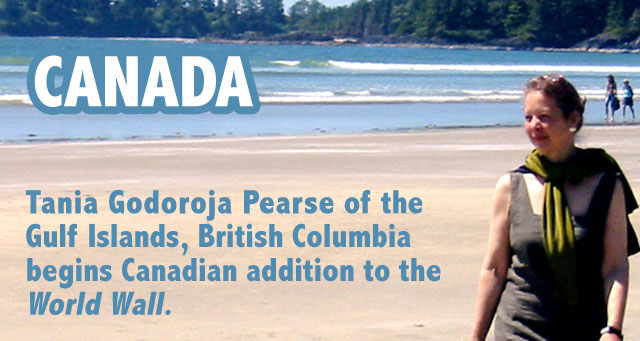 On Herself
I am a child of the Americas, swimming now in the mainstream of the immigrant confusion in Canada. Born in Rio de Janeiro of Russian parents. who in 1950 emigrated from northern china to Brazil, I moved at a young age to Canada and, eventually, settled on the west coast where I live today.

I have been well nurtured by this incredible country, and I remain passionately inspired by its rugged embrace. I am by nature and practice a painter, and although I have achieved no singular artistic greatness in life other than to be loved and to have loved, I have painted all my life for the pleasure of it.

My career has been as a teacher, but my profession has been to immerse myself in the immediate world of family, friends, and children and imbue them with the revolutionary spirit that drives all great art.

I have learned from those I love and admire that when we concentrate on probabilities we are tempted to take what has happened as an instruction for what should happen in the future. In other words, we deny ourselves possibility. On the other hand, if we understand the potential of a situation, what we may learn from the past is not that we should continue to adhere to it and reinforce the trend but, rather, that we should stand in the way of it and oppose to it one of another kind of future based upon the potency of the human spirit and imagination.

We all surround ourselves in life with like-minded characters, and we forget how different other experiences are, how different the realities that the people in our own communities face. All of us learn and live in relationships with one another; much of our reality lies in how these relationships take shape, evolve and fade. What excites me about the future is being challenged to move beyond the bounds of community in this experience, to engage with this phenomenon at a global level.

What makes us who we are? Is it the things we inherit, the hard-wiring of the mind and genes, or is it nature’s inspired embrace? Or is it something more incomprehensible, an emergence of complexity from primal beginnings? Language signifies that much of who we are does not lie within us as individuals so much as between us. Art elevates the significance of language to the celebration of imagination itself, regardless of who we are. The exploration of this celebration is my personal goal in working on the Canadian Project for the World Wall.

On the Future
On the Future
Today we face unparalleled threats to human well-being on many fronts. Several of these, like climate change and massive human displacement, have horrendous consequences and demand all our attention. Artists are a critically vital part of human culture and, as artists, we have an opportunity today, unique to our generation, to halt the mass extinction of cultural diversity that has existed for thousands of years. Globalization, driven by the logic of the capitalist enterprise, is extinguishing this diversity at an accelerating rate, plunging us into a dark world of blandness and uniformity. The enlightened among us have sufficient difficulty restraining this trend, let alone reversing it. 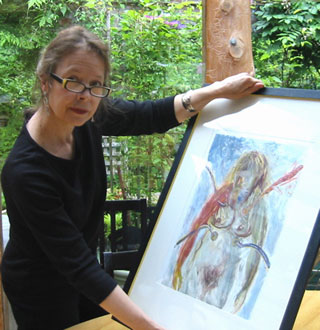 How will the next generation deal with this? Sir Ken Robinson has observed that children entering school this year will be retiring in 2065 and we are supposed to be educating them for this career. And yet none of us have any reliable idea of what the world will look like in five years. What, then, should be we teaching them?

I think that the hope for the future lies in the creativity of the children we are now raising—the ‘turning point’ generation. Contemporary education desperately needs new priorities, ones that put the highest value on novel ways of thinking and doing things. This may mean that literacy and technological proficiency are no longer the keys to finding one’s place in life, or to solving our humanity’s greatest problems. Ingenuity, unbridled experimentation, and rampant curiosity will provide the means for global survival. 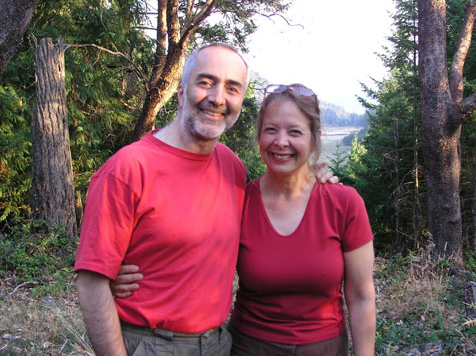