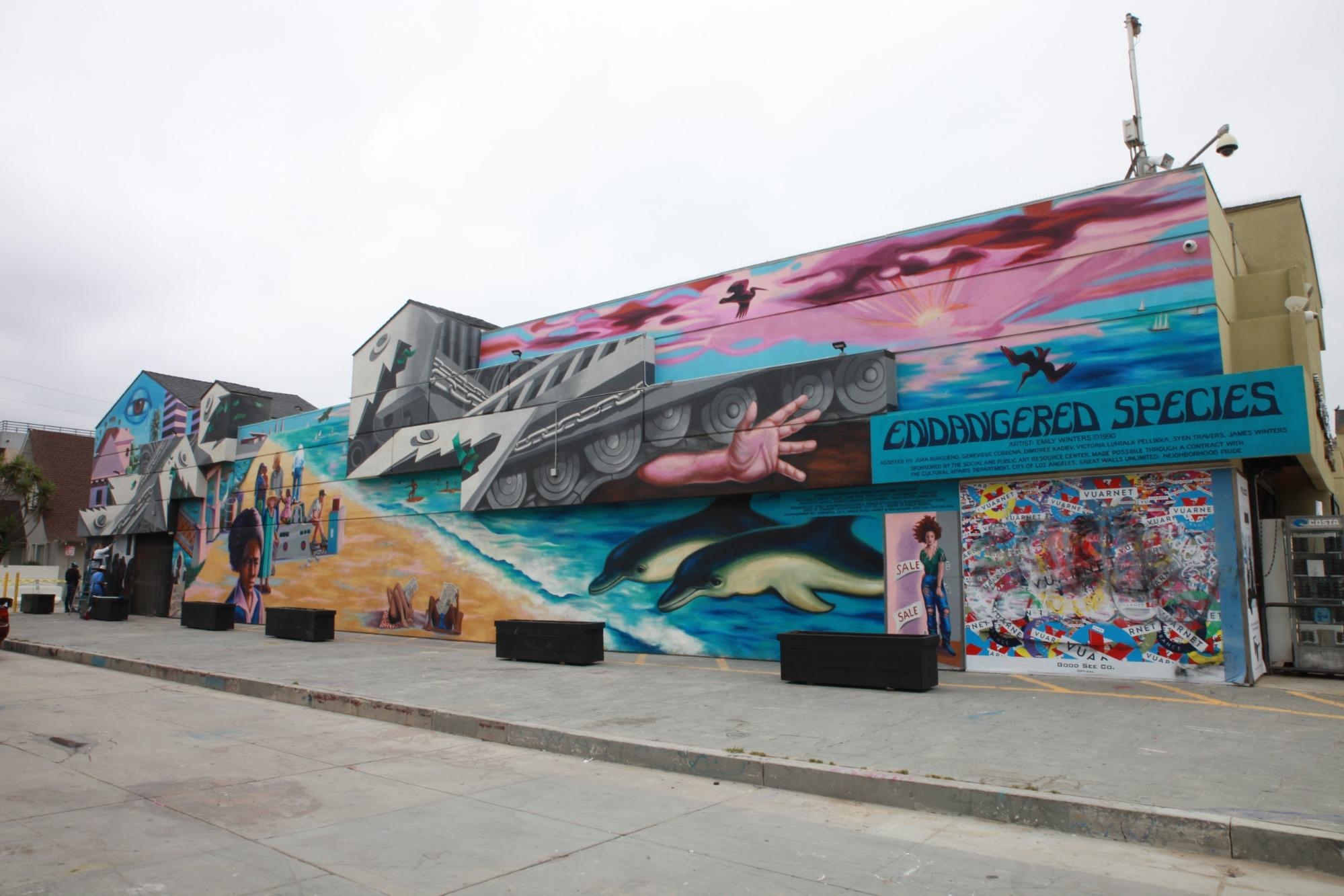 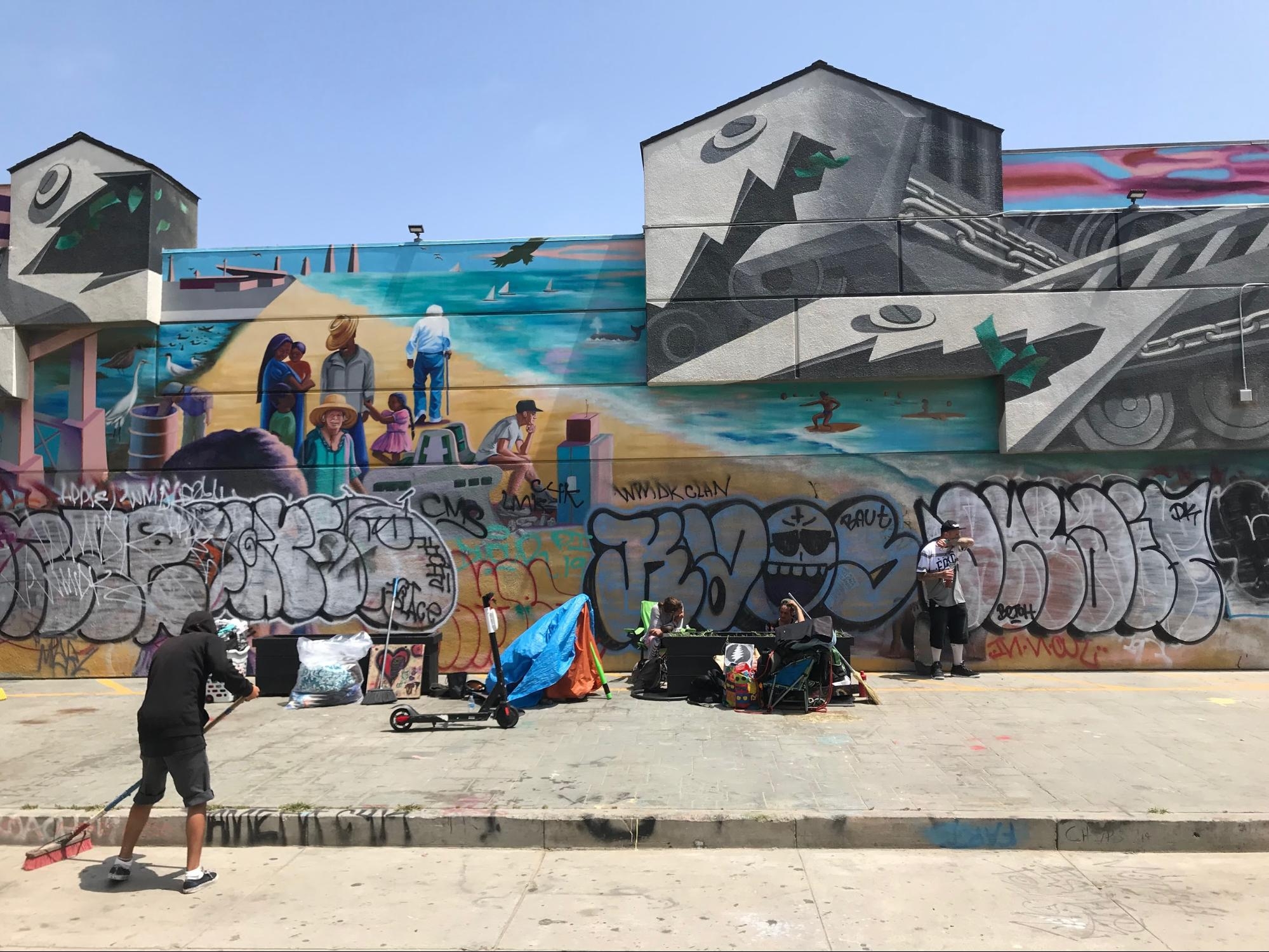 BEFORE: Endangered Species by Emily Winters before 2019 Restoration

AFTER: Endangered Species by Emily Winters after 2019 Restoration

Right off the Venice Boardwalk, mixed amongst a plethora of walls spray-painted as Instagram backdrops and the few historic murals that survived, is a wall with a story to tell. The wall is home to Emily Winters’ mural Endangered Species, and though almost 30 years have passed since its creation, the significance of Winters’ work continues to grow with age. The mural was painted by Winters, her daughter Genevieve Cordova, and a community of youth artists in 1990, illustrating the history of technological advancements and development projects that have had detrimental effects on both the environment and on the quality of life for Venice Beach residents— particularly those within marginalized or excluded communities. It expresses the struggles of the working class, the elderly, and those experiencing homelessness during a period where the cost of living was rising quickly due to the push to raise the assumed desirability of neighborhoods by displacing those who had historically called those places home.

This summer, with support from the Venice Arts Council Endangered Art Fund, local Park Place residences, and the WS Scharff Foundation, the SPARC Mural Rescue Team went out to the boardwalk to restore the mural back to its original brilliance. The mural is protected by MuralShield™, a coating that protects public artworks from vandalization and UV damage, which allows for graffiti to be removed without harming the mural underneath. Although Winters’ work underwent an earlier restoration back in 2014, layers of graffiti had been added on top of the work since. Endangered Species was painted as part of SPARC’s ongoing Neighborhood Pride mural project, which was a 14-year community arts initiative that produced 105 murals aimed to present and preserve the histories and aspirations of communities too often excluded from mainstream narratives. In a city that increasingly prioritizes the commercialization of aesthetics and image, the visual depiction of underrepresented communities remains ever-powerful. To preserve the work is to preserve an accurate, true history in the face of any and all efforts to subvert it. 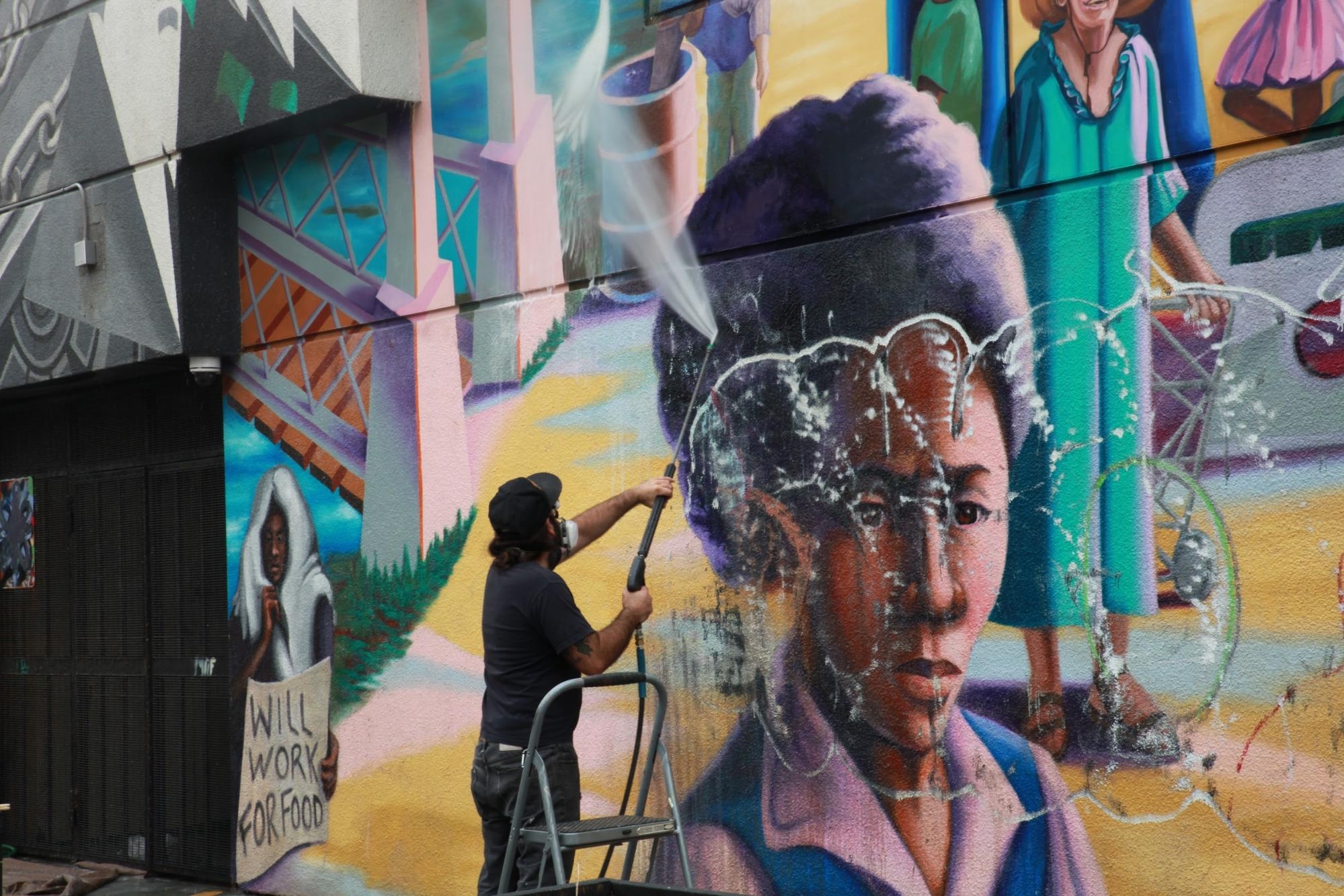 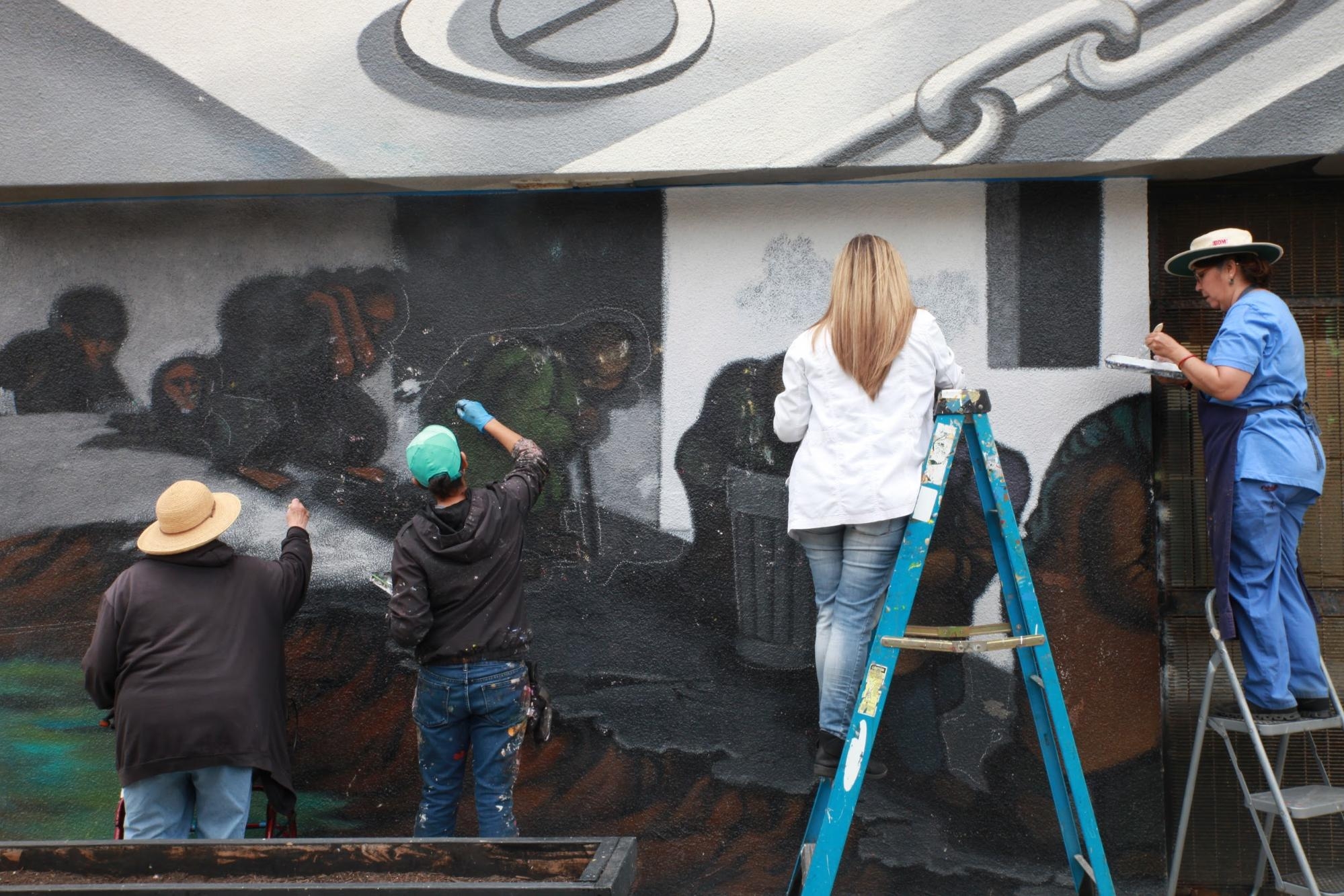 Historically, the Venice Canals were a safe haven for the diverse communities filled with families of color, hippies, artists, and queer people who lived and thrived there. For Emily Winters and her family, this diversity is what drew them to Venice. And although life wasn’t perfect— issues of poverty and prejudice were still present— residents took a prideful solace in the spirit of freedom and creativity so characteristic of Venice. And it goes without saying that these efforts to homogenize spaces were far from desirable for those who lived amidst rapid gentrification.

Winters’ work serves as a snapshot of the Venice community and all that is endangered– not only individuals affected by real-estate development and other exclusionary practices, but the natural environment as well. “Human beings are destroying our air, our water, our land, our communities,” artist Emily Winters says. At the time Winters painted Endangered Species, she’d observed (and would continue to observe) firsthand the impact commercial development has had on Venice. The decades preceding the painting of the mural saw an exponential rise in the disruptive displacement and gentrification of low-income and minority communities, and Venice was one of them.

As Endangered Species showcases, homelessness in Venice remains incredibly rampant, and issues of deliberate lack of local and federal funding, health facilities, and community support have ensured that it remains one of the country’s largest populations of those experiencing homelessness. Almost as if the mural has come to life, you can find tents and temporary encampments in front of Winters’ mural, which foreshadowed the trajectory of homelessness becoming a critical social issue in Los Angeles.

Winters’ mural examines both human experiences and the mechanisms that have impacted housing and resources in Venice. She depicts machines– whether they be literal, like the bulldozers that enter neighborhoods, or figurative, like the large and faceless money-making corporations, as swallowing neighborhoods whole. Endangered Species serves as an immortalization of the community spirit that created the work and reputation of Venice that– although indeed endangered — still remains today. 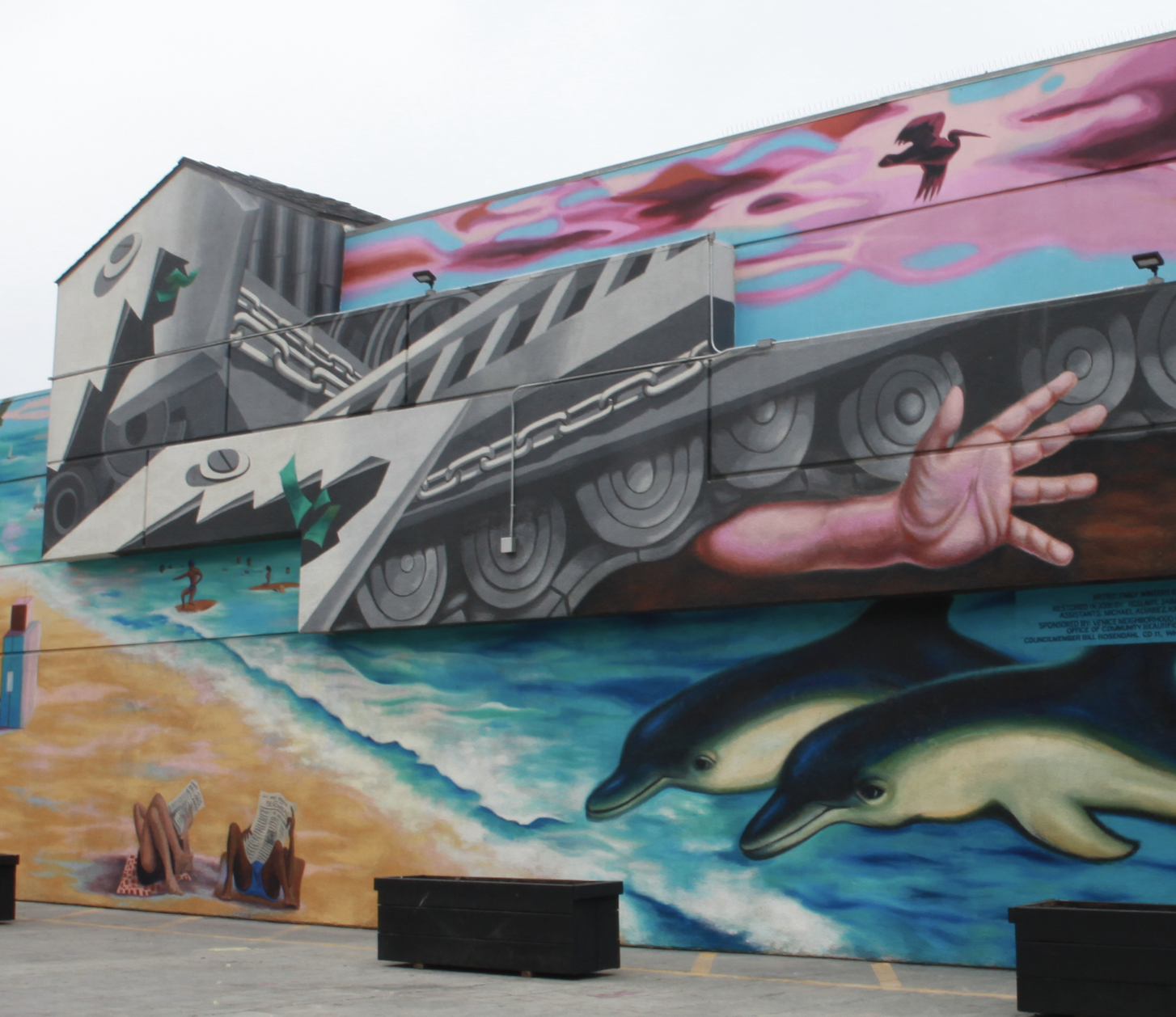 Beginning in the late 1970s, realtors and developers were taking land and removing people from the community at increasingly aggressive rates. And while they did so in the name of progress, Winters saw the truth behind their motives. Pollution from technological advancements coupled with an increased commercialization of space damaged the natural surroundings. True progress, she felt, came in the form of an authentic community expression aimed at revealing the voices and experiences of those hit hardest by these changes.

Genevieve Cordova, daughter of artist Emily Winters assisted during the original painting of the mural and the recent restoration. She recalls her feelings of returning to Venice, the community in which she grew up and the community in which she was forced to leave due to increased cost of living: “I find that I don’t have much in common with most people in Venice now. I walk through there sometimes because it’s pretty, but it’s not the same place…. It’s not my home anymore.” Cordova went on to speak of the animosity within the Venice community that structures relationships between those who live there. There still are those who are dedicated to the arts, though those efforts are increasingly contradicted by the looming presence of large tech companies.

In the words of Cordova, “When we were restoring, so many people who are part of Ocean Front Walk culture, people that are still [like us] they’re all very sympathetic, they see themselves as still looking for a compassionate place to live and be and finding that it’s not easy. “ While individuals like Cordova and Winters no longer physically reside in Venice, the mark they left on the community lives on. Endangered Species continues to offer a space for people to think about issues within their community in an honest, open and creative way while actively facilitating solutions to those problems.